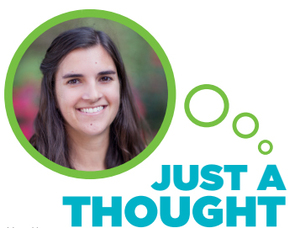 Maria Gibbs is a graduate student in the department of Civil and Environmental Engineering and Earth Sciences. She received her Bachelor’s from Duke University in 2012, and now focuses on the wind-induced vulnerabilities of flexible footbridged structures. As an undergrad, she became involved with the non-prfit Bridges to Prosperity.

Tell us about what you’re involved in right now.

There’s a nonprofit called Bridges to Prosperity (B2P) that builds long-span suspension foot bridges in the developing world to give people access to education, health care, and economic opportunities. They’ve built 200 bridges all over the world, so it’s a really exciting organization. I work specifically on their longer span bridges. It turns out that when you have a light, flexible bridge, they start to have problems with the wind. So this nonprofit can’t build bridges over a certain span because the uncertainty of what’s going to happen in the wind. So my Ph.D. looks at predicting the behavior of these bridges in the wind and then adding mitigation to them so they can be safe to be built over longer spans.

How did you get involved in Bridges to Prosperity?

I have a bunch of friends in El Salvador, and one of them is a school teacher. So she was telling me one summer about how her students were swimming across a river to school, and obviously, that is ridiculous. (And this is when I was an undergrad at Duke). So I did some research and found Bridges. From there, I was asked to join the board of Bridges to Prosperity, so I did that, representing the university. Along the way I learned more about this problem with the wind. By this time, I was trying to figure out what to do after graduation from Duke: Do I want to design connections on highway bridges? No, not for me. So I thought the idea of doing research to fix this problem would be a cool thing to spend my time doing, so that’s what I’ve been doing for the past five years.

Do you have a favorite memory?

I can sit in the lab and come up with this new, fancy thing to add to the bridge to make sure that they are safe in the wind. But it probably won’t work: It will probably use materials that aren’t sourced locally, and construction methodologies that don’t exist, and people won’t care about it, because it isn’t helping them in their everyday lives. If it breaks, no one will know how to fix it. So I draw on the world of design thinking — from product design and human-centered design — and brought those tools. The idea is that I have a goal in mind to make the bridge safer. But, how we do that is not my role. We have to go into the community to find who there is an innovative, creative thinker and build a design team. I explain, “here is what I am trying to achieve. Now let’s match that with needs or aspirations of the community so we can design something that works for you everyday that you care about.”