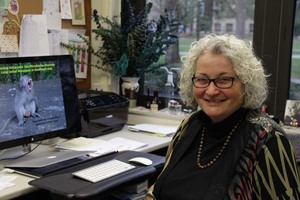 Professor of Biological Sciences Hope Hollocher is known primarily for her work on the population ecology, microbiota and genetics of macaque monkeys in Southeast Asia, specifically, in Bali and Singapore. She has spent years researching these primates in the field, analyzing their DNA and studying their gut parasites, such as intestinal worms. Her main goal is to understand how genes and parasites move through macaque populations and how social interactions and human activity affect this movement.

Could you describe a typical day of research in the field?

So a typical day in the field would be to go out in the morning with gloves on, a mask, and pick up — poop! My field work is basically going and collecting samples and bringing them back to the lab to extract the DNA and do these kinds of analyses. One of the things that we’ve been doing is looking at the [macaque] hosts. The larger context is the hosts and how they’re distributed in the landscape and their genetic relationships to each other as it relates to the composition of the parasites in their gut. Organisms don’t disperse evenly in the landscape. Macaques cluster for lots of reasons. They could cluster because there’s a river in the way, and so they can’t get to the other side of the river to be with those other monkeys. But they also cluster because of their social interactions. The social system will affect the macaques, and that affects their genetics as well. And then humans have a huge influence on this. The potential for zoonosis is pretty high.

Working with primates in the wild sounds intriguing, but also kind of dangerous! Do you have any crazy stories from your time in the field?

I know that my graduate student Amy, when she was there, saw certain macaques in a certain population that were very aggressive. And they would steal things from you. They grabbed her collecting bag. And you just had to let them have it for a while, and then they’d get bored, and they’d leave it, and then you could go and get it. But she was at a point once where there was such an aggressive troupe in one of the populations in Singapore that she had to stay in her car because they were actually being kind of aggressive. But other than that, when I was there (I didn’t go to that same population) the monkeys did little things…  If you turned your attention away and you were looking at something else, the juveniles might sometimes come up and want to climb up you and do kind of mischievous things.  Not really dangerous but mischievous.

What made you decide to pursue a career in scientific research, and what advice do you have for Notre Dame’s aspiring researchers?

Well, I just think it was a love of science from a pretty young age. My mom, when I was really young, would buy me kits, scientific kits, to make my own solar heater, or some other little battery thing. I just think it came easy to me, I really loved it, and I liked the logic of it. And I loved the synthesis of it too. It’s very complex, and I like complex things — trying to tease things apart.

My recommendation to students is just to get exposed to as much as possible. When I entered college (I went to the University of Pennsylvania) I was a declared astronomy major. And I ended up completely in genetics. I think trying as much as you can, that’s my advice to students here. And go to talks! Those are very helpful.