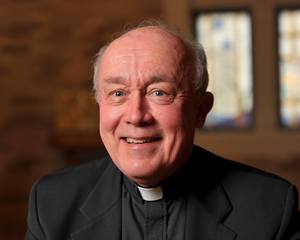 Rev. Brian Daley is an endowed theology professor at Notre Dame who studies the early Church and early Christian writers. He received bachelor’s degrees from Fordham University and University of Oxford, as well as a master’s degree from Oxford before being ordained as a Jesuit priest. After his ordination, he continued his studies in Germany and at Oxford. Daley is a Rhodes Scholar and won the 2012 Ratzinger Prize, the equivalent of the Nobel Prize for theology.

The sex abuse scandals within the Church can make it seem like there is a lot of evil around us. How do you reconcile this with your faith and the goodness that also exists?

We all know theoretically sin is a reality in human life, and that all of us are subject to that. I think here we see that people living in our Church, our culture — the people we trust, like the clergy — can also abuse their relationships and their positions that they can actually do sexual abuse and domination of people. It’s really scandalous. I mean, it does shake people’s faith a lot. And to live with this, I think we have to get to a deeper level of what it means that we’re all weak and we’re all subject to sin. It’s too easy to say, “People who do this are just evil people.”

I’ve never known anybody closely who was involved in this ... but I’m sure that most of them are people you’d say are really good people; they have gifts and probably a sincere desire to serve the community, at least in the beginning, but [they] can get derailed and deceive [themselves] and think, “I can get away with this; it’s not so bad,” or, “This kid won’t know what’s happening to him.” I think we have all kinds of ways to deceive ourselves. And people do it in other areas of life, too. So, to be a call to self-examination and ask ourselves: “What am I really doing in my relationships? Am I acting in a way that abuses other people?” In some ways it’s an analogy to the Me Too movement.

Is there some place that people should turn to find hope when they feel overwhelmed by instances of evil in the world?

I think the message of the Scriptures, the message of the Church, the message of every religious tradition ... is hope in the midst of suffering. That’s a challenge; it isn’t a given. But it’s a call: Can you stick your life on this? Sort of like in the face of the Holocaust. Having seen such human evil, can we still believe in the reality of God? And some people said their faith was ruined by that. But I think the strength of both Judaism and Christianity is to say that we believe in a God who is present in an evil world and who can overcome evil from within, who calls people to be self-critical and to lead heroic lives and to be critical of each other and to say we have to change.