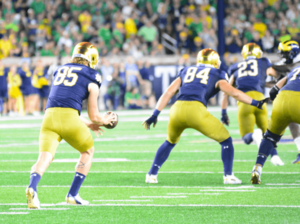 Notre Dame-Michigan is always a big game. But when the rivals haven’t played in five years, are both ranked in the top 15, are visited by “College Gameday” and meet in the first game of the season, the stakes are even bigger.

The Irish fans donned their green shirts and packed into Notre Dame Stadium, creating a raucous atmosphere and a great home-field advantage for the team.

“The atmosphere was amazing,” senior wide receiver Chris Finke said after the game. “The fans really made the game special. It was the loudest I heard the stadium since the Texas game my freshman year.”

The game was predicted by many to be a defensive clash. Notre Dame and Michigan had two of the top defensive lines in the country, and many people thought that rushing yards would come at a premium. The Irish were not intimidated and started scoring early and often.

Sophomore running back Jafar Armstrong scored his first career touchdown in his first start just 85 seconds into the game. On their next possession, the Irish scored on a 43-yard touchdown pass from senior quarterback Brandon Wimbush to Finke. Finke made a miraculous leaping catch, reaching over a Michigan defender to put the Irish up 14-0 early on. “It was a play we worked on all week in practice. Brandon threw a great ball and all I can say is God was with me on that one,” Finke said.

After a few unsuccessful offensive drives by both teams, Michigan finally kicked a field goal to make the score 14-3 with just over 10 minutes left in the second quarter. The Irish responded quickly, however, with another Armstrong rushing touchdown. This time it was only for four yards but Armstrong made a great play sneaking in to the corner of the endzone, avoiding multiple white jerseys.

This 21-3 lead did not last long as Michigan’s Ambry Thomas returned the ensuing kickoff 99 yards for a Wolverine touchdown. Both teams went into the locker room at halftime with Notre Dame leading 21-10, but there was plenty of football left to play.

In the second half, both defenses proved why they were considered two of the best in the country. After several fruitless drives, the Irish scored their final points of the game off the foot of senior kicker Justin Yoon. He kicked a 48-yard field goal with 4:59 left in the third quarter to put the Irish up 24-10.

Highlighted by junior defensive end Khalid Kareem’s nine tackles, two sacks and a forced fumble, the Irish defense stifled Michigan’s offense led by transfer quarterback Shea Patterson. Kareem was named the Walter Camp Defensive Player of the Week for his efforts. The defense did not allow an offensive touchdown until late in the fourth quarter when Michigan converted on a 3-yard rush to put the Wolverines within seven.

After a quick three-and-out by the Irish, Michigan regained possession with under wo minutes left and had a chance to tie the game for the first time since the opening kickoff. That’s when senior defensive lineman and captain Jerry Tillery stripped the ball out of Patterson’s hands, sealing the Irish victory.

This was not only an important win for Notre Dame to help them move up in the rankings (ranked No. 8 in AP poll after the win), it also provided the team a lot of confidence going into the rest of the season.

At the time, the remaining schedule for the Irish looked like it would be a very tough challenge with games against Stanford, Virginia Tech, Florida State and USC. However, all of these teams struggled after the early weeks of the season and lost multiple games. Michigan did not and won their next 10 contests. Entering the last week of the regular season, Notre Dame and Michigan wered ranked third and fourth in the nation, respectively. The Irish had the best win in the country from that opening game in September and used that win to silence any doubters who thought they did not belong in the College Football Playoff.