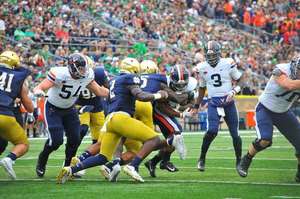 With everything that was different about this off-season for third-year Notre Dame defensive coordinator Clark Lea, the need to replace last season’s graduated talent remained unchanged. This is no modest undertaking for any coach, but especially not for Lea, who has seen seven of his defensive starters be selected in the NFL Draft since his arrival to South Bend in 2017. Yet, just two games into this extraordinary season, Lea has again displayed a knack for successful reinvention.

In 2019, via a combination of an excellent pass rush and an experienced secondary, the Notre Dame defense allowed a meager 17.9 points per game and ranked in the top five nationally in team pass efficiency defense and passing yards allowed. This off-season, six of the players most responsible for those defensive numbers were added to NFL rosters: defensive ends Julian Okwara and Khalid Kareem, linebacker Asmar Bilal, and defensive backs Troy Pride Jr., Alohi Gilman and Donte Vaughn. Team captain and safety Jalen Elliott was lost to graduation as well.

Thus, one of the most glaring question marks surrounding this year’s Notre Dame team was the defensive play in the secondary. Lea was returning Kyle Hamilton, the sophomore star safety who will certainly be playing on Sundays in the near future, and Shaun Crawford, a team captain. But aside from them, there was almost no experience returning in the secondary.

Over the off season the Irish found a reprieve in the transfer portal by acquiring two graduate transfers in former Ohio State safety Isaiah Pryor and former NC State defensive back Nick McCloud. Pryor and junior Houston Griffith were set to compete for the starting safety spot opposite Hamilton, and McCloud added much needed depth to a depleted group of cornerbacks lacking any sort of meaningful experience.

Currently, Notre Dame is 2-0, and what initially was a nebulous area for the Irish has thus far ripened into a potential bright spot. In the season opener against Duke, Hamilton and Crawford (newly transitioned from cornerback) started at safety while McCloud and junior TaRiq Bracy started at corner. McCloud and Bracy led the team in real defensive snaps played with 68 and 66, respectively, while junior D.J. Brown replaced Hamilton, who left the game early in the third quarter with a lower left ankle sprain. Against a Duke team with as skilled a coach as David Cutcliffe and as talented a quarterback as Clemson transfer Chase Brice, the Irish secondary gave up no touchdowns through the air, despite losing their best defensive back to injury.

Against the University of South Florida, Hamilton was ruled out again, Bracy was unavailable due to undisclosed reasons and McCloud was limited to just 14 snaps. As a result, sophomore Cam Hart led the secondary in snaps played, with Brown and Griffith tied for second behind Hart. The Irish defense posted a shutout and gave up just one completion of 20 yards or more en route to succumbing a measly 125 passing yards. In Bracy’s absence, freshman Clarence Lewis started at corner and made a strong case to maintain that role, finishing the game with five tackles, three pass breakups and one tackle for loss.

Heading into this season, there was much uncertainty surrounding the capabilities of the projected starters in the Notre Dame secondary, let alone the “depth” beyond the starting four. While the Duke and USF games are unreflective of the offensive prowess that a team like Clemson brings to the table and there are still a number of questions to be answered by Lea’s group moving forward, it’s clear Notre Dame’s secondary is more skilled, resilient and capable than previously expected.