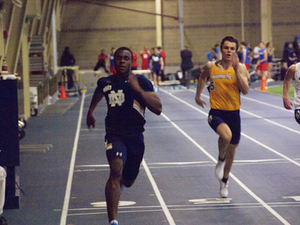 The Irish opened the 2014 track and field season with much to be determined in head coach Alan Turner’s first season.

Turner has experienced shoes to fill in taking over for former head coach of 39 years, Joe Piane. The team made a statement in Turner’s first meet as head coach.

The group answered the call in the Blue and Gold Invitational at Loftus by winning 22 out of 30 events and breaking multiple school records. The event was highlighted by freshman middle distance runner Jessica Harris and senior thrower Emily Morris. Both bested Notre Dame’s previous records set in 2011 in their respective events. Harris ran a time of 2:46.47 in the 1000 meter run and Morris threw the shot put 16.03 meters.

“The effort was definitely there; the kids were competing really hard and competing hard needs to become a habit,” Turner told UND.com. “… It’s important to go out there and give 100 percent effort every time, and they started off well tonight and did that.”

Two standout returners also made an impact as seniors Chris Giesting and Jade Barber each placed first in multiple events. The duo will help pace the Irish this season as Barber was an All-American last season and Giesting was named both the ACC Scholar-Athlete of the Year and Most Valuable Performer in the ACC Championships.

The Irish will next compete in the Simmons-Harvey Invitational at Michigan before returning home in late January for the Notre Dame Invitational.