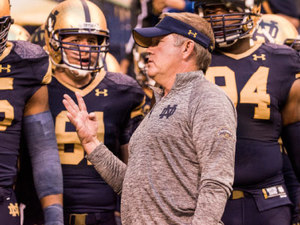 Head Coach Brian Kelly embraces a multitude of responsibilities on Saturdays. Not only does Kelly handle the in-game personnel and strategic decisions during games, but also he has typically been responsible for calling plays. In 2013, those duties were assigned to Chuck Martin who left the team to become the head coach at Miami University following the season.

Kelly returned to dictating his offense’s operations in 2014 to the beat of a different drum than in his previous seasons at Notre Dame. Kelly has the luxury of security as head coach. Nothing is absolute, but Kelly signed a five-year contract extension at the beginning of the 2013 season. Through that security comes the stability to build an identity. It took Kelly four years, but he has now incorporated the same offensive mindset that put him on the BCS map at the University of Cincinnati. 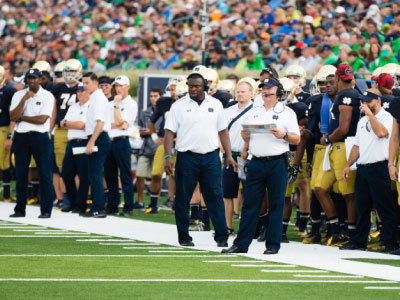 Kelly’s spread offense dominated the Big East during his tenure at Cincinnati. Trips to the Orange Bowl and Fiesta Bowl headlined his success. Kelly helped produce offensive standouts such as Mardy Gilyard, Armon Binns, Tony Pike and Isaiah Pead, who all made it to the NFL under his guidance in the spread. Cincinnati was known for keeping defenses off-balance to level any potential talent gap.

The Kelly name denotes a certain offensive style. Much like Chip Kelly’s high-flying Oregon offenses, Brian Kelly went up-tempo and no huddle, and relied heavily on four wide receiver sets, quick screens and option runs to keep the defense on its heels. Assignment football and creativity was vital to keeping the Cincinnati train rolling on offense. Blockers were assigned to specific defensive players, and the offense was finely tuned to incorporate all eleven players into the overall play design.

During Cincinnati’s heyday in 2009, the Bearcats were fourth in scoring with 38.6 points per game, threw for nearly 4,000 yards and 40 touchdowns and averaged 6.7 yards on the ground with their starting running back.

At Notre Dame, Kelly was forced to adjust to different players and tweak the offense based on personnel strengths. Kelly inherited many of Charlie Weis’s recruits and was forced to run a more physical style that featured multiple bigger and stronger inline blockers and a slower tempo. The pure shotgun sets no longer became essential.

The physicality worked in 2012, as a ground and pound offense resulted in a 12-0 regular season. But the presence of an immobile Tommy Rees at quarterback limited the zone read, a staple in Kelly’s offenses.

After Kelly’s first four seasons produced just one top 50 offense, something clicked in this fifth year. The recruiting process created an influx of talent to fit Kelly’s scheme. The pressure on the offense was heightened to support a young defense in its first year of the 4-3 system. The group responded by scoring 33 points per game, passing for nearly 300 yards per game and netting over 5,000 total yards on offense. The reemergence of a mobile quarterback to run the offense helped loosen previous playbook restrictions. 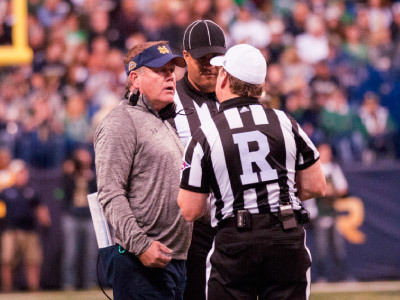 “It’s a lot closer (to what we did at Cincinnati) … We’re a lot more comfortable in this style of offense,” Kelly told USA Today. “For me to call this kind of offense, it’s easier for me because it’s what I’m used to.”

Kelly played both Everett Golson and Malik Zaire in 2014. The added dimension of getting outside the pocket with the quarterback allowed Kelly to stretch the field, run the read option, and create mismatches by stretching defenses on the outside.

Depth at wide receiver and running back generated mismatches at certain spots. Sophomore wide receiver Will Fuller finished the season with over 1,000 yards and 15 touchdowns. Sophomore wide out Corey Robinson’s size allowed him to flourish in one-on-one coverage against smaller cornerbacks. Junior receivers C.J. Prosise and Chris Brown experienced breakout seasons in the spread system and sophomore running backs Tarean Folston and Greg Bryant combined for over 1,000 yards and over five yards per carry in just their second seasons on campus.

Kelly’s offense is back to pilling up offensive statistics. Although turnovers were present throughout the season, the youth of the players contributed to much of the miscommunication. The growth of the unit is now essential to allow Kelly’s crew to take the next step.

The system and play calling possibilities are now close to endless, but precise execution is the real key. Kelly’s confidence in his spread scheme and the players he has hand picked to run it will go a long way in making the offense tick in the manner that he envisioned when he took the Notre Dame job.