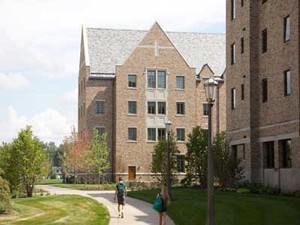 This year, two new residence halls opened on in the northeast quadrant of campus the what’s popularly being called “Odd Quad,” thanks to a combined total donation of $40 million. Flaherty Hall, donated by Jay and Mary Flaherty, houses 226 young women in its 71,000 square feet. Dunne Hall, donated by Jimmy and Susan Dunne, holds 221 young men in the same square footage.

Flaherty’s flashiest features? Each resident’s room locks and unlocks with an electronic key card, and each floor boasts a full kitchen. Angelle Henderson, class of 2020 and resident of Flaherty says, “It’s very generous that they gave us a full kitchen on each floor — and for those who don’t have a fridge, [we] can use the one in the kitchen.”

Although Flaherty did accept transfer students and incoming freshmen, the majority of its residents are from Pangborn Hall, which now acts as temporary housing for dorms undergoing renovations. The Walsh Hall community resides in Pangborn’s building this academic year, but future residents of Pangborn will also include Badin Hall (2017-2018) and Morrissey Hall (2018- 2019). Erin Vaughan, class of 2019 says, “This has the community of Pangborn — except with air conditioning and wider walls.”

Despite most of its residents transitioning from an established dorm with its own traditions and history, Flaherty focuses on fostering a sense of community. Katie Georgi, senior and RA for 2B, says, “We have hall council every Tuesday night before we have mass at 10. The whole dorm gets together and we have snacks and food and talk about ideas, such as having a mascot, which is a big deal!”

(At the time of printing, Flaherty had not chosen a mascot, although the “Flaherty Fireflies” idea is gaining momentum.)

Freshman Mike Feeny says he was confused at first when he received his dorm assignment. “I didn’t know much about it. Halls that I had looked at had tours and history. But when I looked into Dunne, I found out it was a brand new dorm.” Although both new dorms face the challenge of building a sense of family among their residents, Dunne cannot rely on an established community like Flaherty can with its former Pangborn residents. Even returning students need to adapt to this new building and new resident life. Sophomore Brendan Watts says, “It’s interesting because I came into a community that had yet to be established, as opposed to being put in Dillon or Sorin. But coming into Dunne, everyone’s new so it’s a clean slate for everyone.”

For senior and RA Ian Tembe, Dunne’s newness is an opportunity to focus on building a sense of unrivaled community. “The beautiful thing about Dunne hall is that it has no tradition. We were given some guidance from the donor, Jimmy Dunne. He felt a strong community in his residence hall, and he wanted every Notre Dame student to feel the same way. So, our mission is to create a residence community where everyone feels that they are part of it and [can] uphold it and make it home.”