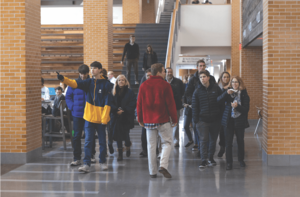 Do you feel a sense of belonging at Notre Dame? Does your identity prevent you from fitting in? Have you experienced discrimination on campus?

These questions should sound familiar to the 52 percent of students that provided feedback in the inaugural Inclusive Campus Student Survey last spring, in which respondents were asked to divulge their feelings about campus inclusivity. Recently, the Notre Dame administration published the results. They hope to continue this discussion and act on their findings.

The survey marked the beginning of a conversation on diversity and inclusion on campus that many students felt should have begun much earlier. Overall, the results were positive, indicating that 85 percent of students feel a sense of belonging on campus. Yet, for one group, the LGBTQ+ community (in the survey, separated into LGBTQ+ and transgender/non- binary categories), the statistics were less favorable. While only 2 percent of both men and women strongly disagreed with the statement “I feel a sense of belonging at Notre Dame,” 21 percent of trans/non-binary students strongly disagreed.

The disparity between these groups was a common trend throughout the survey: while most binary students would encourage a prospective student of a similar background to attend Notre Dame, 21 percent of trans/non-binary students would ‘definitely not.’ This clear discrepancy is one that needs to be addressed, especially with the growing LGBTQ+ population on campus. It should be noted, however, that only 24 trans/non-binary students completed the survey, which indicates the need for further inquiry directed towards this community.

The survey dedicated a large portion of its questions towards the different types and effects of adverse treatment. Fortunately, 53 percent of students reported never having experienced adverse treatment of any kind. Of those who did, the most common cause was the student’s political views, at 20 percent. These negative encounters were manifested primarily through verbal comments (80 percent), mocking/offensive jokes (42 percent) and prejudiced stereotyping (38 percent). The survey’s wording, however, was not precise — mocking jokes and forms of stereotyping are verbal comments. This ambiguity will make it difficult for the administration
to directly address the driving issues of adverse treatment in the future. This issue was revealed in the survey: 48 percent of students believe the overall political climate at Notre Dame has not changed during their time at Notre Dame despite the administration’s goal of inclusiveness.

Despite this flaw, the survey seemed to be quite effective. By specifically targeting unsatisfied minority groups to gain more insight on their opinions and by adjusting the survey questions to be more effective, it will be an impactful tool for discerning students’ thoughts on diversity.

Yet these results are meaningless if they are not acted upon.

The university’s next steps will be crucial in their goal of improving campus inclusivity, as they have acknowledged this pressing need. The administration will hold several different panels and forums throughout the coming semester in order to continue the conversation on inclusivity and to plan for improvement. Throughout November, senior administrators will hold open office hours to provide students with further opportunities to voice their concerns. Clubs and organizations are also being encouraged to reach out to leaders in the Division of Student Affairs with questions and ideas.

Thus far, the campus has only been engaged in investigation and conversation, but in the spring semester student-led focus groups will be meeting to discuss concrete solutions the University can implement. These groups will have a variety of focuses; some dedicated to specific minorities and others focused on general inclusiveness. Though the results did not indicate any unexpected shortcomings in the current campus climate, there are certainly improvements to be made.

Many students feel that the administration should strive to implement their plans for improvement to the campus environment quickly. The university has acknowledged the importance of making changes in favor of inclusivity, and for that, the student body is profoundly grateful.