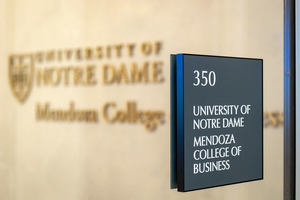 At Notre Dame, a school renowned for its business opportunities, Mendoza majors are easy to spot. They can be found in the career center, off campus at one of the local bars or looking refreshed and wide awake while students from every other college are sleeping in the dining halls after taking rigorous midterm exams. While the most-cited advice in a recent survey of Notre Dame students suggests the best way to interact with them is “don’t,” here is a list of actions in case this interaction is unavoidable.