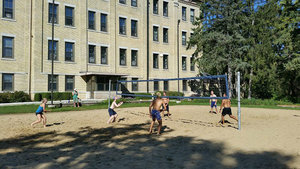 Many of the richest ND traditions are centered around the 30 on-campus residence halls, including mascots, nicknames and events. Each dorm hosts a signature event, ranging from Fisher Hall’s Fisher Regatta to Farley Hall’s Pop Farley.

The Walsh “Wild Women” hosted their signature event, Mr. ND, on Sept. 21 in Washington Hall. Mr. ND is a wild beauty pageant, featuring one contestant from each of the 16 men’s dorms. The night began with introductions of the lovely contestants, then progressed to the highly anticipated talent round.

While all of the talents were certainly unique, some crowd favorites included Mr. Duncan’s “Jingle Bell Rock” dance from Mean Girls, Mr. O’Neill’s rendition of “Defying Gravity,” and Mr. Stanford’s performance of “She Will Be Loved.” Mr. Dunne wrote a song to the tune of “Piano Man” ranking the men’s dorms and Mr. Keenan drank an entire bottle of hot sauce. Perhaps the most disappointing talent was from Mr. Morrissey, self-proclaimed professional rock, paper, scissors player; he lost his first game against an audience volunteer. All of the contestants exhibited fantastic sportsmanship and made it a wonderful night for charity.

Three contestants were honored, but only one man was crowned Mr. ND. Mr. Dunne was voted Mr. Walsh; Mr. Stanford was the Fan Favorite. Mr. O’Neill was named Mr. ND and O’Neill Hall earned bragging rights for the next year.

All the proceeds from the event went to Joseph Academy, a K-12 school with three locations near Chicago. It is a private, non-profit, therapeutic day school that uses a structured motivational system and individual attention to cater the needs of the students.

Additional hall events that took place over the past month include Lyons Hall’s Volley for the Vets, Howard Hall’s Totter for Water and Lewis Hall’s LHOP.

Volley for the Vets, hosted Sept. 18, proved a success, as the event quadrupled this year in the number of teams who signed up and the amount of money raised. Winners of the event were Jack Hughes, Connor Rafuse, Andrew Rodgers and Andrew Abinader.

Lewis’ signature charity event featured an all-you-can-eat breakfast buffet from 9 p.m. to 1 a.m. Tickets were $5 and the proceeds benefited the Food Bank of Northern Indiana. Called LHOP after the popular chain restaurant IHOP, the event featured the various floors in Lewis, each of which carried a different specialty item, such as bacon, eggs, or cinnamon rolls. Sarah Duehren said typically about 1,000 people come and that the event raised over $5,000 this year. To ensure success for the event, though, Duehren and the other coordinator, Amanda Bono, began planning early.

“We began planning back in April and things really picked up right when we got on campus in August,” Deuhren said. “The planning involves many, many meetings with our rector, AR and one another to talk our logistics and make sure we’re on top of everything.”

Duehren said she was attracted to planning the event due to its renown and success.

“It’s such a fun night because all of Lewis is essentially there all night just baking and cooking for our friends and raising money for a good cause all at once,” she said.

Howard’s signature charity event featured a 24-hour seesaw marathon where the Howard Ducks man a seesaw from 4 p.m. on Thursday to 4 p.m. on Friday. Through pre-fundraising as well as suggested donations for non-Howard residents to ride the seesaw, residents raised over $5,000 this year, which will go to helping Engineers Without Borders with a water sustainability project in Cameroon. New additions to the event this year included a dorm competition to encourage more participation from non-Howard residents.