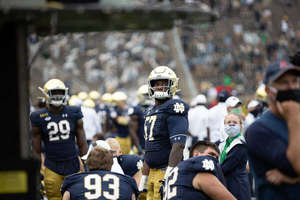 The second week of March saw the sports world grind to a complete halt. In just one week, athletes went from preparing for tournament runs, an upcoming season or the biggest event of their lives, to sitting home waiting for what would come next. But no one knew what the future would hold for collegiate and professional athletics in the United States.

Sports fans went on an emotional roller coaster for the long months of summer as news trickled out about the return of sports, albeit without fans. With each passing week, the situation got brighter as many states saw plateaus and ensuing declines of COVID-19 cases. With the success of the NBA and MLS bubbles, there was certainly room for hope that college athletes would be able to return to the sports they loved in the fall.

Then on Aug. 11, everything changed for the outlook of college sports when the Pac-12 and Big Ten followed several smaller conferences in the cancellation of all fall sports. What appeared to be an ever more hopeful situation turned into a dizzying spin of what-ifs. As classes began and Major League Baseball struggled to contain outbreaks within organizations in a non-bubble climate, the number of questions continued to rise.

Throughout all of the turmoil, Notre Dame was committed to one thing above all else: playing football. Just ask the rest of college football, which was on the brink of canceling the season entirely, when Notre Dame decided to join the ACC in order to maintain the ability to play a football season.

It only took a few weeks once we returned to campus for me to start packing my bags in anticipation of a return to remote learning. With this came the dawning realization that Fighting Irish football would likely be canceled for the year, especially once we hit 80 cases for three consecutive days. Then, cases started to decline, and the football season was just a week away.

Despite the rapid decline in cases, there were still questionable decisions being made across campus and the South Bend community as social distancing was minimal at times. As the Duke game drew nearer, I became more confident that the season would at least get underway and we’d survive the first few weeks of gameplay.

The week after the Duke game saw no rise in cases and all of a sudden it was game day again, as the University of South Florida and a few of their fans arrived on campus. Once more, there were gatherings all across campus and a lack of social distancing in the stands. But yet again, the number of cases did not begin to soar in the week following. Naturally, my confidence began to climb that we would see a full Notre Dame season culminating in a run to the College Football Playoffs (then the Big Ten and Pac-12 reversed course, so maybe I’ll settle for a New Year’s Six Bowl).

But then the news broke that the following week’s away game against Wake Forest was postponed. On the Tuesday before heading to Wake Forest, Head Coach Brian Kelly announced that the team would suspend team activities. Several positive cases among football players resulted in too many in isolation or quarantine to continue practicing as normal.

While the game has since been postponed to Dec. 12, it was a wakeup call for college football fans who have accepted that football is back. Everything can change in the blink of an eye, especially because of the close contact that many athletes are in throughout their day. All it will take is one team to cancel their season due to the seemingly unstoppable spread of COVID-19, and it seems like we could see a domino effect of cancellations ensue.

As I take stock of the current college football climate and what appears to be coming next, I cannot help but feel a sense of dread. Experts have been predicting that we would see a resurgence of COVID-19 for months, and efforts across the country have not yet been enough to stop the virus. Is it just a matter of time before the season is permanently canceled and we are forced to wait till next fall to watch the Fighting Irish play?

Despite this sense of impending doom, the Big Ten decided to reverse course and schedule the football season to begin by the end of October. Then news broke that several other conferences, including the Pac-12, would also be returning to play within the next few months. Just as things were starting to look worse, everything changed once more. If these conferences know something we don’t, then there is still hope that the season will be played.

It seems football is back, and it isn’t going away. The season means too much to the university, the players and the fans to cancel. I believe the university will do whatever it takes to ensure that the entire season will be played, even if schedule adjustments have to be made and a new testing strategy has to be adopted. This season will look like nothing we’ve ever seen before, but it will be played in some capacity and a national champion will be crowned. There will undoubtedly be more bumps in the road, but but things are looking up once more.