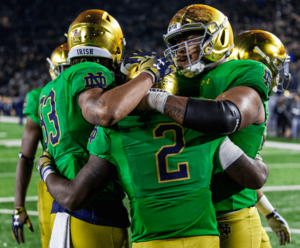 The grass is always greener on the other side, except at Notre Dame where everything is green all the time. From the green of South Quad on a fall gameday to the green of dorms like Alumni, Fisher and Badin, green is all around campus. The last home game of the 2018 season was no exception, and it saw the Fighting Irish improve to 10-0 on the season all while clad in the historic green jerseys.

The Seminoles entered a climate much different than what they were used to back in Tallahassee. The 27-degree temperature at kickoff was the third- coldest at Notre Dame Stadium since 1980. The weather hardly phased the Irish; rather, they embraced it, and the secondary even warmed up shirtless before the game.

Senior quarterback Brandon Wimbush started for junior Ian Book, who injured his ribs the week before in the win at Northwestern. In the first quarter, Wimbush threw for two touchdowns to bring the Irish to a 17-0 lead. His strong performance answered many questions about whether or not Notre Dame could produce offensively without Book.

The second quarter saw even more dominance from the men in green. After a Florida State touchdown, the PAT attempt was blocked by senior defensive tackle Jerry Tillery and returned by junior cornerback Julian Love for two points. Senior running back Dexter Williams added a 58-yard touchdown run, and Wimbush notched his third passing touchdown, the second receiving touchdown of the day for senior tight end Alizé Mack.

The powerful first-half performance pushed the Irish ahead 32-6 on the back of a suffocating defense which produced two turnovers: an interception by senior safety Nick Coleman — thanks to great coverage and a deflection by senior linebacker Te’von Coney — as well as a fumble recovered deep in Notre Dame territory.

Kelly gave the team more than the green jerseys; he gave them the green light to run wild in this game.

The second half featured even more suffocating defense, which held Florida State to only one more touchdown. The Irish still outscored the Seminoles in the second half thanks to Williams breaking free for a second touchdown run of more than 30 yards, and to senior kicker Justin Yoon’s ever-reliable foot knocking in yet another field goal. Williams’ 202 yards made him the first running back to rush for more than 200 yards versus Florida State since 1982.

The Irish and their fans walked away celebrating a dominating Senior Night, one step closer to their dreams of a berth in the College Foot-
ball Playoff. Coach Kelly gave the game ball to Alizé Mack for his two touchdowns of the night, but Mack had other thoughts. “This ball right here, it’s going to the entire team. You guys inspire me more than anything.”