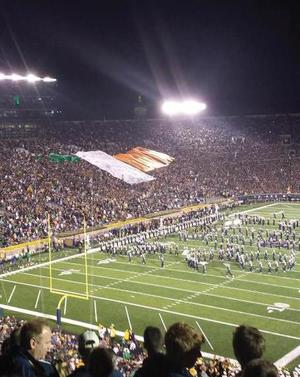 The publication says that after watching the Notre Dame student section attempt to create an Irish flag against Michigan on Sept. 6, they were forced to update their rankings.

“In the history of our rankings, we’ve never had such a clear and public display of failure like this,” a U.S. News official says. “We really had no choice but to lower Notre Dame’s ranking.”

U.S. News investigated whether this may have been an anomaly, since the students took part in a long day of tailgating and likely consumed far too many bratwursts to function normally.

They concluded, however, that Notre Dame students simply are not as smart as they seem.

One freshman had this to say about the incident: “I love doing the wave!” Another added, “Dillon. Chicago. Business. What about you?”