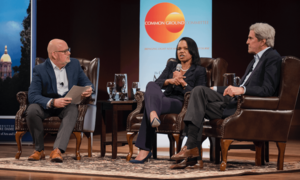 Former secretaries of state John Kerry and Condoleezza Rice, who served under Barack Obama and George W. Bush respectively, visited campus on March 19 to take part in a conversation on America’s place in the world. The Common Ground Committee (CGC), a nonprofit dedicated to “bringing light, not heat, to public discourse,” hosted the event. The CGC arranges public forums so that prominent leaders with opposing views can engage in respectful and constructive discourse about pressing issues.

The night’s discussion, co-sponsored by “The Christian Science Monitor,” the Notre Dame International Security Center and the Rooney Center for the Study of American Democracy, was one in a series of conversations aimed at finding consensus on hot-button topics.

The conversation started off light as Secretary Rice, who completed a master’s degree in government and international studies at Notre Dame, asked, “Can I at least say a ‘Go Irish?’” As the uproarious applause died down, Kerry playfully lamented giving up the “home field advantage” to “Condi,” a friendly nickname that served as a reminder of cordiality throughout the night, even when the two were at odds.

The discussion, moderated by Howard LaFranchi, a diplomacy correspondent for “The Christian Science Monitor,” examined several pertinent topics, including the Trans-Pacific Partnership, Brexit, climate change and U.S. relations with Russia, North Korea and China. In an unexpected turn, the two found the most common ground on immigration. Rice concluded her thoughts about immigration reform with clarity: “I don’t like the conversation we’re having about immigration in this country. We have to remember we are a country of immigrants.” Kerry responded with his agreement.

Though the panelists spent most of the night in consensus, their most overt disagreement arose out of a question posed by an audience member about how best to engage moderates in an increasingly polarized political culture.

Secretary Kerry proposed that the onus to present an organized agenda that appeals to voters is on politicians. Secretary Rice, however, argued that citizens have a responsibility to engage in the political process, claiming that no obstacles stop people from voting in the United States. While both acknowledged a certain level of citizen responsibility, the two ultimately agreed to disagree on the existence of institutional barriers to voting.

As the night drew to an end, both secretaries expressed gratitude for the ability to partake in such a conversation and encouraged audience members to engage in civil discourse themselves. Secretary Rice warned of the dangers of living in your own echo chamber: “If you are in the company of people who say ‘amen’ to everything you say — find new company.”