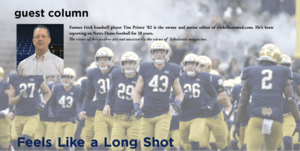 Part I of that premise was that the Irish would win 10 of their 12 regular-season games in 2019. Whether they landed another playoff berth would be predicated upon the third game against Georgia and/or the seventh game at Michigan.

Ten regular-season wins, a Camping World Bowl victory over Iowa State and a close loss at Georgia with a decisive setback at Michigan resulted in an 11-2 season, which was the eighth time in school history that the Irish reached the 11-victory mark. Three of those eight times have come under the direction of head coach Brian Kelly.

And yet hollow rings the accomplishment in today’s playoff environment. The creation of a four-team playoff system six seasons ago has become the demarcation in today’s game whereas the previous systems — bowl games that didn’t always pit No. 1 vs. No. 2 to determine the national champion and then one game between the top two teams — left a bit more wiggle room for interpretation.

Of course, Holtz won the national title in 1988, which is the ultimate demarcation in determining college football superiority. And yet what Kelly’s program has done since the 4-8 season in 2016 has reshaped Notre Dame into a top 10-ish program.

Is that enough? Is that the limit? Can we expect more?

The makeup of the University of Notre Dame du lac makes it incredibly difficult to anticipate the push for national titles the way programs such as Alabama, Clemson, Ohio State, Oklahoma and now LSU can. All Notre Dame can do is work within the parameters of the University and compete at the highest level capable.

That’s not an excuse, as some would suggest, but just a picture of reality in a world where Notre Dame’s competitors gain entry into schools with “athlete-students” that Notre Dame could never consider.

So then what is Notre Dame’s ceiling? Double-digit victories on a regular (if not every year) basis? Definitely.

A national title? It feels like a longshot by the look of recent champions Clemson, Alabama, LSU and Ohio State. They clearly have been a cut above.

Most realistic Notre Dame football fans can live with the Irish maximizing their abilities. Five-star prospects aren’t going to seek out Notre Dame on a regular basis because when it comes to five-star players and their expectations, the path of least resistance does not travel through South Bend, Ind.

There are much easier ways on the road to the NFL.

So what can we, as Notre Dame followers, ask of the football program?

To continue to remain true to the ideals of the University of Notre Dame. To recruit true student-athletes. To seek ways to maximize recruiting potential. To find the best coaches that fit the Notre Dame environment. To remain on the cutting edge of the variables within the program that go beyond pure football talent (i.e. training, recovery, nutrition). To play with passion. To play with a dedication to one another and Our Lady’s university.

Kelly’s use of the term “traits” has become trite to many, and yet abiding by those traits is the only way the Irish can truly maximize their potential.

Will that be enough to win a national title at Notre Dame? The Irish might need a break or two with a matchup. They may need an upset on one side of the bracket or perhaps a football ricocheting off a foot at the most opportune time.

It’s more difficult than ever and it’s not going to get any easier. But at 33-6 the last three seasons, Kelly has the Irish on the right track. Now it’s a matter of breaking through against a Georgia on the road or upsetting a Clemson in the playoffs.

Maybe that happens with Kelly; perhaps it’s with someone else. As long as Notre Dame stays true to itself, we can take pride in the principles under which Notre Dame functions as the Irish continue the quest for college football’s ultimate prize.