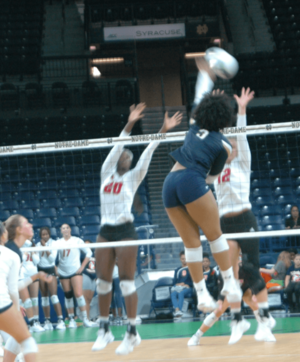 On Sept. 6, when the Irish were down two sets to one to No. 18 Purdue, sophomore outside hitter Sydney Bent was focused on making the play in the fourth set. Instead of trying to be textbook perfect, she was trying to give it her all. Bent’s intentionality paid off, and the Notre Dame volleyball team came out victorious 3-2. They now have a solid 11-3 record and are 4-0 in the ACC.

Bent is optimistic about this year, after starting in 23 contests and finishing third on the team in hits during her freshman season with 270. She credits coach Mike Johnson for instilling in the team the sense of focus that led them to their recent win. “We always say this: If you’re everywhere then you’re nowhere. You pay attention to one thing at a time, so that when things are chaotic you have one thing that grounds you in the moment,” Bent said.

She is also focused this season on managing her emotions during games. For Bent, that means taking on more of a leadership role and supporting her teammates, most of whom are underclassmen. “Last year, that was what I struggled with the most,” she said. “If I made two or three errors in a row I would let it get to me and I was almost never able to bring myself back. This year, I’m putting more of a premium on that and not letting my emotions dictate my playing.”

With a lack of upperclassmen on the team this year, Bent said other players have stepped up as leaders, pointing to sophomore setter Zoe Nunez as an example. Even when the odds in a game don’t look promising, Bent said Nunez keeps her emotions in check.

Despite how young the team is, Bent is confident they’re on an upward trajectory. She believes winning the ACC is within reach this season given the team’s talent and personnel. In the next few years, she envisions the team making a big run in the NCAA Tournament and even winning the national championship. As for herself, Bent is less focused on individual accolades and more on the legacy she leaves on ND volleyball. “When people look back on my time here, I want them to say positive things and have positive emotions,” she said.