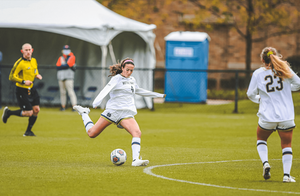 Sammi Fisher first fell in love with soccer watching her two older sisters, Jenna and Monica, perform on the pitch.

Monica and Jenna, who are six and eight years older than Sammi respectively, were able to play soccer together all the way through their collegiate careers at Marymount California University.

“I was always around the game,” Fisher recalled of her early years. “When I was really little I was always at [Jenna and Monica’s] practices and games and watching them. They’re really the ones who inspired me and pushed me to be better than they were, so that was really awesome.”

If you’ve watched a Notre Dame women’s soccer game over the last five seasons, you’re probably well acquainted with the name Sammi Fisher. The graduate student has played in 88 games throughout her career, starting in 81 of them.  For perspective, Notre Dame has played in 93 games total over that same span.

It’s worth reiterating. In the last five years, Fisher has missed just five games. What’s possibly even more impressive, though, is how productive Fisher has been since first arriving on campus in 2017. The Simi Valley, California native has accumulated 28 goals and 14 assists in her Irish career.

Twelve of those goals have come this season alone, a season in which the former Grace Brethren High School product has reached new heights. A midfielder the majority of her career, Fisher switched positions to forward this season, and the results speak for themselves. With at least one game still left to play, Fisher has already surpassed or tied her season highs in goals, assists, points, shots on goal, and game-winning goals. Fisher’s 12 goals rank second in the ACC and her four game-winners are tied for fourth in the conference.

Fisher credits her goal-scoring prowess to her teammates’ ability to set her up for success.

“I think a lot of it is just attributed to everyone around me on the field too. Our outside wingers taking people on and getting the crosses on. I'm just lucky that I'm in that position to be able to finish it,” Fisher said.

“We've talked a lot this season about getting the right mindset going into things, and one of those things has been reminding myself and believing in myself that I am a goal scorer and I can create goals and finish goals,” Fisher recalled.

“Our assistant coach Martin [Rennie] helped us see that for ourselves. I try to focus on that a lot, reminding myself of the goals I have scored and the goals that I will score and envisioning myself in those scenarios and then hopefully it happens in a game and luckily it has so that's been exciting to see.”

Remarkably, Fisher was just named to the 2021All-ACC first team, her fourth all-conference selection in five years. She’s already been a member of the All-Freshman team (2017), Third Team (2019) and Second Team (2020).

It’s no surprise, then, that Fisher is serving as a team captain this year for the third consecutive season. She believes her greatest asset as a leader is the trust she instills in her teammates.

“Since my freshman year I've kind of always gotten minutes on the field and I think that has really helped build confidence in me for my teammates. Now I have so much experience under my belt, I feel like people can look to me to help through times of adversity and in games,” Fisher noted.

“I hope I can be that calming presence on the field when things are getting crazy, but I do hold myself to the high standard of wanting to be consistent in every game and hopefully others can follow with that as well.”

Fisher has modeled her leadership style in part after former Irish defender Ginny McGowan, who was a senior captain on the team Fisher’s freshman season. The two developed a bond rooming together on several road trips that year, and Fisher was always impressed with how much McGowan demanded of herself and her teammates.

Now, as a captain herself, Fisher tries to do the same and is hopeful she’ll be remembered for her steadfast work ethic.

“I've always kind of had to pride myself on always working hard whether that was in practice or games, so hopefully that can carry on throughout the years to come too even when I'm gone,” Fisher said candidly.

This year, Notre Dame has posted an impressive 13-5-1 record en route to a fourth place finish in the ACC. Three of those five losses came in the second to last week of the season, where the Irish played (at the time) No.1 Virginia, No. 6 Duke and No. 7 North Carolina back-to-back-to-back all on the road. Though the results didn’t end in Notre Dame’s favor, two of the games went into overtime, the other was decided in the final ten minutes and all three were one goal games.

Fisher believes such a grueling stretch made Notre Dame a better team heading into the postseason.

“We always knew [the end of the season] was going to be a battle, and I think it really is going to set us up very well for the [NCAA] tournament. I know we're all super excited to get back into it,” Fisher explained. “We feel now that we can actually rest up and put all of our energy towards the national championship and that being our goal.

“It shows that we can play with anyone in this country and I think we're really excited to prove that to everyone else in the [NCAA] tournament as well,” Fisher continued.

In terms of results, it’s been the best year of Irish head coach Nate Norman’s four-year stint at the helm. Norman, who was an assistant coach on staff the year before he took over as head coach, has coached Fisher in all of her five seasons. Unsurprisingly, the two have a close relationship.

“It's kind of funny to think that we've been here for the whole time together. But, he's been great. We kind of leaned on each other a lot during that transition process [of Norman becoming head coach], and he always believed in me and always pushed me to be great and then I always respected that about him,” Fisher said.

It has been far from an easy road, but it has been rewarding.

“As the years went on, obviously we had some difficult years in terms of soccer results, but we always kind of stayed true to what we were trying to do and rebuild the program in a sense. Now that I'm finally here, my last year, it's really awesome to see everything that we've been working on the past few years is kind of coming together,” Fisher said, adding that Coach Norman has “been a huge part of that.”

Though the Irish recently dropped their first-round ACC tournament matchup 3-2 at home to Clemson, the team is set to host SIUE in the first round of the NCAA tournament after securing a No. 3 national seed. According to Fisher, the Irish’s postseason success will depend on the team playing to its strengths.

“We always talk about focusing on our game plan, trying to put all the outside factors away, and just focusing on the next pass, the next tackle, things that you can control and that's what we need to do,” Fisher explained.

“We need to get back to what we do well; moving the ball, attacking teams relentlessly. Getting back to doing that will be vital moving forward.”

In a season that has already been a victory lap for Fisher, the graduate student has one last shot at capturing a national championship. But regardless of the eventual outcome, Fisher is relishing the opportunity.

“This past year, getting the chance to come back, it has been something I don't take for granted at all,” she said.. “I'm really just trying to make the most of that.”