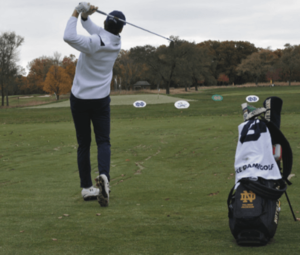 The men’s golf team entered the third and final round of the Quail Valley Collegiate Invitational neck and neck with the University of South Florida. The Irish had yet to secure their fourth top finish of the season when freshman Palmer Jackson walked onto the 18th green. With a birdie on the par 4, Jackson sealed the victory for the Irish, who posted a team score of 43-under-par, defeating USF by a single stroke. At 16-under-par, Jackson achieved his first individual top finish at Notre Dame. Of the five tournaments the team has participated in this season, Jackson placed in the top 10 of the field at three of them.

Entering his freshman season, Jackson was determined to make the lineup for every tournament the team played. While he has achieved that so far, his ambitions extend beyond that personal objective.

“My main goal was really to help the team to win as many tournaments as we can,” Jackson said.

So far, Jackson has lived up to expectations arising out of his impressive pre-college career and his recent participation in the highly competitive U.S. Amateur tournament in August 2019. There, Jackson fought his way to the quarterfinals of match play before falling to John Augenstein of Vanderbilt.

Jackson’s impressive run positively impacted his mentality heading into his freshman season. “The U.S. Am. was a pretty big confidence boost for me because that was the first time I played under a pretty large crowd of people and a nationally televised event,” Jackson said. “It was a little bit different just to see how my body and my routine reacted under all of that pressure and coming out from there, I knew that I was able to perform under any amount of pressure in any tournament. So I feel like that’s going to prepare me really well for the ACC Championship and a national championship.”

Jackson looks with anticipation toward the spring season.

“The tournaments will be a little bit more difficult because we play better teams, but I’m confident in myself and our team to do really well,” he said.