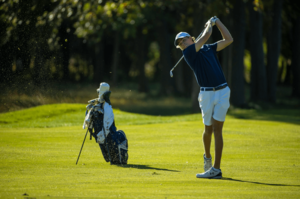 Palmer Jackson was a toddler when his dad bought him his first set of golf clubs — a plastic set, perfect for a young child yet to be entrusted with metal clubs.

As he got older and grew out of them, he started experimenting with other sports in addition to improving his golf game. But in high school, he decided to make golf his sole focus. Now a sophomore at Notre Dame, Jackson plays for the golf team and continues to dominate on the course.

During his freshman year, he played in all possible 19 rounds and was one of only five golfers to be in the regular lineup for Notre Dame. Despite the shortened season, they won four tournaments — a record — finished in the top 10, and Jackson himself shot the second lowest season stroke average for Notre Dame (70.79).

“I learned very quickly that I had to focus on myself in the way that we had a lot of success last fall in the fall 2019,” he said, discussing how last year’s season prepared him for the current one.

“This spring, we all are focusing immensely on our own game and not concerned about the team as a whole, because we trust each other, we trust that our coaches have prepared us.”

With his freshman season cut short due to the onset of the pandemic and his current season adapted to adhere to COVID-19 regulations, Jackson’s time on the team has been anything but conventional.

“It’s definitely different going to tournaments,” he said. “Typically, you play with people from other teams. But due to COVID, we’ve been playing some events with everybody from the same team in the same group, which is a little bit different.”

With less integration with other teams during tournaments, Jackson has been able to spend time perfecting his own game.

“I’m just looking for a little more consistency,” he said. “I’ve been putting forth a lot of work this spring and in the offseason. It’s definitely paying off right now.”

But prior to the season even beginning, most opportunities to practice were eliminated. While Jackson would typically spend the summer competing in tournaments, he found himself confined to his basement, hitting a ball into a net. For extra practice, he hit balls in empty fields as though in a driving range. And on days when he had some time, Jackson would drive an hour and a half from his home in Pittsburgh, Pennsylvania to West Virginia to play.

“It was tough,” he said. “Everybody was in the same boat. But even while you’re not able to physically golf, you can still work out, strengthen your body, strengthen your mind and do the right things that are going to lead you to success once everything opens back up.”

This season, the team has several major tournaments left to compete in, including the NCAA regionals and NCAA finals.

“As a whole, our team is in a really good place, but specifically I’m just going to focus on trusting the fact that I’ve worked hard and just playing to enjoy, playing to win every tournament,” he said.

Outside of Notre Dame, Jackson has competed in the U.S. Amateur three years in a row and hopes to continue his golf career post-graduation.

“While college golf is very exciting, myself and the players on the team have our future goals in professional golf. I’m really excited for that opportunity when it comes,” he said.