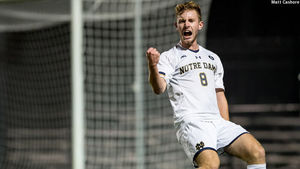 When Irish soccer player Jon Gallagher walked away with the Athletic Coast Conference (ACC) Offensive Player of the Year award last season, it was both an achievement marking all the success that he has had in the program and a testament to the worldwide journey that brought him here.

The first Irish-hailing player in the program’s history, Gallagher was born just outside of Dublin, in Dundalk, Ireland. His soccer career sent him to school in the United States and Singapore and to trials for youth soccer programs in Italy (Juventus FC), France (Olympique Marseille), England (Newcastle United and Blackburn Rovers) and, most recently, the Philadelphia Union of Major League Soccer. Gallagher landed at Notre Dame rather unconventionally, when he was invited to a training camp by coach Bobby Clark in 2014, after sending in game videotape of himself. With each passing season in his collegiate career, Gallagher’s skill has improved along with both his goal count and overall importance to the team.

Last season, however, Gallagher ascended to new heights as one of the top players in all of the NCAA — as recognized by the Offensive Player of the Year award. In the 2016 season, Gallagher set personal records and led the ACC in goals (14) and total points (35). He also tied for third in the conference in assists with seven. The Irish thrived whenever Gallagher found the back of the net, going a perfect 9-0 in the regular season in games where Gallagher scored. Proving his mettle in clutch situations, Gallagher put in five game winners last year. Of those, he says his most memorable goal was the regular season clincher against number two ranked Syracuse, a lefty, 20-footer to go-ahead 2-1 with only 17 seconds remaining.

In the offseason, coach Bobby Clark talked to The Journal Gazette, a Fort Wayne magazine, about his star pupil Gallagher, “You want a whole team of them. He’s quick, he’s fast, and the big thing is he’s getting better every day.”

To that extent, Gallagher has stepped up the gauntlet and again improved his play this season. He has six goals through eight games and a .550 shot-on-goal percentage. Along with the increased production of fellow senior forward Jeff Farina and the development of sophomore midfielder Tommy McCabe, the Irish attained the number one ranking in the NCAA for a week. They sit at 6-2-1 as of Oct. 1 and will be a tough team to beat come tournament time.