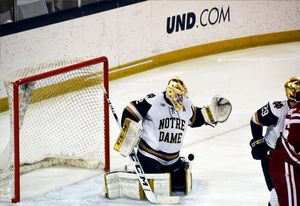 Notre Dame senior goaltender Cale Morris’ resume on the ice speaks for itself: two straight Frozen Four appearances, one trip to the NCAA DI men’s hockey championship and back-to-back B1G championships in the team’s first two years in the conference. Those are just the team awards.

Furthermore, just recently Morris has been named alongside fellow senior Cal Burke as two of the top 20 men’s ice hockey student-athletes for accomplishments both on and off the ice under the categories of community, character, classroom and competition.

But, before all of the collegiate glory came vigorous games of knee hockey with friends. In fact, as a kid growing up in Larkspur, Colorado, Morris credits a longtime friend for introducing him to the sport he would eventually fall in love with.

“One of my best friends growing up, Kyle Hayton, who played for St. Lawrence and then Wisconsin, he was two years older than me and was good friends with my sister,” Morris said.  “I was just over at his house a lot playing basement hockey and sooner or later I just got in the net using his hand-me-down gear, so it went from there and then progressed into where I am now.”

In terms of which position to play, that was simple. Kyle was a goalie, so Cale became a goalie.

“I didn’t really try anything else, just kind of fell in love with it,” Morris said. Hayton is now playing professionally with the Greenville Swamp Rabbits of the ECHL.

Morris’  Notre Dame story is similarly simple. He was playing for the Waterloo Blackhawks of the USHL when he started getting recruited by associate head coach Andy Slaggert. He visited and after weighing all of his options decided it was the right fit for him.

“Now that it’s all said and done, I couldn’t have picked a better choice,” Morris said.

Speaking on behalf of what he will be able to take away from his time spent at Notre Dame, Morris passionately noted, “I think my time here has made me a better person. Well-rounded. The type of people that we’re surrounded by here, the supporting staff and all of the other students at Notre Dame just challenge you to be the best version of yourself. I think coming to a place like Notre Dame you’re going to challenge yourself to just become better.”

On the ice, Morris recounted that he is most proud of the back-to-back B1G championships, and is blessed to be able to have a run at another one this year. He described it as something that he would look back on and remember for a long time down the road.

This season in particular, the Irish have been challenged and tested week in and week out in a strong B1G conference. Now, as a senior, Morris has taken on the role that guys like Cal Petersen and Jake Evans played for him. He used his first few years to learn everything he could from their example on and off the ice and has utilized those lessons to help guide his team this season

“I think every season you experience growing pains and it’s kind of a roller coaster up and down, you just try to have the least amount of lows as you possibly can. We’re challenging ourselves to get better each day and I think we’re progressing in the right direction and moving forward, it’s exciting,” Morris said.

Moving forward, Morris believes that he is a much better and more complete hockey goalie on the way out than he was coming in, by leaps and bounds. The behind-the-scenes goalie sessions with coach Jackson and the rest of the Irish staff have, according to Morris, “definitely paid off on the ice.”

When asked about his future plans, Morris responded calmly and reflectively. “I’m excited about it, I’m not really sure what the future holds but I know I’ve been enjoying my time here, looking forward to each game weekend and taking it day-by-day trying to do something special with my last senior year.”