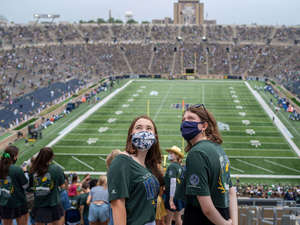 “These unprecedented times” are the words that seem to populate every email and TV advertisement seen today. The four-word phrase may be overused and somewhat annoying to hear so often, but it nevertheless rings true, and is felt very heavily on a game day in South Bend. While “Shipping Up to Boston” can still be heard resonating from dorm rooms in the early morning, the parking lots that, in a pre-pandemic world, would be crammed with excited tailgaters are empty shells of their former selves.

This change is mirrored inside the stadium. Around 10,000 people, consisting of students from the tri-campus community, as well as faculty, staff and players’ families, fill the stands. This equates to about 12% of the maximum capacity of 80,000. The new rules, put in place to promote health and safety, require students to sit with their roommates in groups of up to four people. Some students, however, moved out of those seat assignments during the first two games. Although this behavior increases the chance of another outbreak on campus, so far there have been no signs of a second surge in COVID-19 cases among the student body.

The new guidelines also seem to overlook the process of exiting the stadium. Because there is no staggered exit process, the stadium concourse is often jammed with fans as they leave. Ultimately, though, mandatory masks combined with an outdoor environment, while far from perfect, have seemed to be fairly effective thus far.

Teams and fans from across the Atlantic Coast Conference are also feeling these new changes and have responded in a variety of ways. Most schools deciding to allow in-person spectators  have  limited capacity to 20-25%, similar to Notre Dame. Some, however, have decided to play without fans in the stands, such as Duke and Syracuse. For many schools, such decisions rest upon state guidelines. Notably, Virginia and Virginia Tech are only allowed to have 1,000 fans in the stands due to the state restriction on large gatherings. Others, like Boston College, had no fans for games in September, but will now re-evaluate the situation.

In these “unprecedented times,” the university continues to make its best efforts to have a successful football season for both the players and the student body. While the new game-day experience has been different, the game is still being played. The situation remains ever-changing, as can be seen from the postponement of the Wake Forest game, which has been rescheduled for Dec. 12.