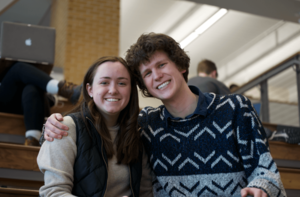 Just four hours after Notre Dame student government released the names of the four tickets running for student body president and vice president, junior Elizabeth Boyle and sophomore Patrick McGuire braved the single-digit temperatures on campus and made their way to the second floor of the Duncan Student Center to meet with Scholastic.

The two came smiling, confident and enthusiastic, eager to share their campaign platform that was months in the making.

“I’d love to be a part of this journey to connect with people and to make Notre Dame the place we love so much for everyone,” McGuire said.

Boyle, a political science and peace studies major living in Breen-Phillips Hall, has been most involved with work surrounding Title IX at Notre Dame. A board member on the Committee on Sexual Assault Prevention, Boyle also spearheaded the “Stand 4 IX” campaign last year which prompted the university to make three revisions to their Title IX policies.

McGuire, an economics and sociology major, currently serves as the president of Siegfried Hall and is passionate about dorm life at Notre Dame. He hopes to be a resident assistant his senior year.

Seven of the 11 pages of Boyle and McGuire’s campaign document are dedicated to student empowerment, with subsections ranging from diversity and inclusion to student life to community engagement.

“Our whole goal in this was not to say, ‘Patrick and Elizabeth know what’s best for campus,’” Boyle said. Instead, she pointed to her ticket’s involvement with groups around campus and their goal to “put them in the spotlight and not us.”

The ticket has already reached out to students both in person and through the “plat-forum” on their website where students can raise issues or propose changes.

Boyle and McGuire hope to do more than just gather feedback. They proposed a bill tracker that would allow students to follow policy changes through administration and implementation.

The “mega-calendar” is another feasible, pragmatic idea that Boyle and McGuire devised. By tracking the dates and venues of all hall and club events in one place, student government could avoid unnecessary conflicts.

“If we’re having the Keenan Revue at 8 p.m., we don’t want to have McGlinn Casino night at 8 p.m., which is happening,” McGuire said.

“Under student empowerment, we have listed every department of student government except for the department of gender relations,” Boyle said. “We thought it was so important that it needed to be its own point.”

Related goals include increased GreeNDot trainings and support for on campus organizations such as PrismND, GALA ND and Spectrum.

The third and final part of Boyle and McGuire’s platform is dorm reform. The two seek to ensure that male and female dorms are treated the same and that older dorms have increased funding now that dorms such as Dunne and Flaherty have opened.

Two traits of the candidates were consistently present throughout the interview — experience and an understanding of the student body.

Between the two of them, Boyle and McGuire have a combined five years of experience in student government. Both worked in First Undergraduate Experience in Leadership (FUEL); Boyle served on four Student Government committees during her sophomore year and McGuire is Siegfried’s president as just a sophomore.

McGuire commented on how experience has prepared both himself and Boyle for a heightened role in student government: “The process of making change happen on Notre Dame’s campus … it’s complicated … I think having gone through it and having made those connections is invaluable.”

Additionally, the two have been engaged with the student body since their arrival at Notre Dame. After deciding to run for student body president and vice president, the two said that they sat in LaFortune Student Center for two hours “just talking to people.”

Like many students, Boyle and McGuire call Notre Dame home. Their primary goal is to make sure that everyone feels that way — that Notre Dame is a place that loves and supports them.