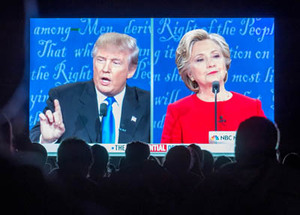 Donald Trump and Hillary Clinton square off as Notre Dame students look on.

College Democrats and College Republicans may not agree on the best candidate in this year’s presidential election, but they do agree on one thing: The media outlets are wrong. Much of the press, from Pew Research Center to the Washington Post, argues that millennials will not vote in this election or are not fully engaged in this election. College Democrats and College Republicans beg to differ.

"Our events so far have gone really well, and so many students have come with great ideas, passion for electing Secretary Clinton and an excitement to get directly involved here on campus,” says Casey Baker, an officer for College Democrats and the leader of Notre Dame Students for Hillary.

College Republicans saw similar enthusiasm toward activities and events, with a rise in membership, involvement and desire to be on board.

College Democrats supports Notre Dame Students for Hillary with weekly phone banks and a social media push, and the group also volunteers for Lynn Coleman’s campaign to represent Indiana’s 2nd Congressional District in the U.S. House of Representatives. College Republicans works on active campaigning in South Bend, getting candidates on the ballots for the primaries and hosting events like movie watches on campus.

Stevenson added that the club is important not only to the candidates, but to students as well.

Both clubs are encouraging students to carefully consider the implications of this election and what it means for their futures.

“This election is far too important, and it is your obligation and duty to have your voice heard,” Baker says.

Stevenson adds that the election directly applies to students, who need the jobs that would come from a good economy.

“We’re about to graduate, we’re about to go into the world, and an important economy for us now is much more important than it was when we were 13 years old,” he says. “We actually now have the ability to pick a candidate that we think will create an economy where the jobs we need are there.”

Stevenson also encourages students to consider the other candidates as well if they are unsatisfied with the two major party options, as the major parties incorporate some of the popular third party views into their platforms for the next election.

While both clubs are doing their part to ensure students are voting in this election, it comes as no surprise that they differ in their political views.

“Secretary Clinton is by far the best choice for millennials in this election,” Baker says. “What we see with her campaign is dedication to inclusion, community, equal opportunity and civil rights that you will simply never see from Trump. Beyond this, she promotes love and kindness, and it shows in each of her policies.”

Stevenson, on the other hand, believes Trump makes the ideal candidate because he represents a break from President Obama’s economic and social policies, which Stevenson says have not helped the United States.

Above all, however, both clubs highlight the importance of the millennial vote.

“The role of millennials in this election is to continue speaking out and making what we care about is heard, and in order to do this, it really comes down to casting your vote,” says Baker.

Dylan added that the parties cannot afford to count out the millennials either.

“If you need to win an election, you can’t ignore the millennials,” he says. “It’s an interesting little position of power we as a group have right now.”