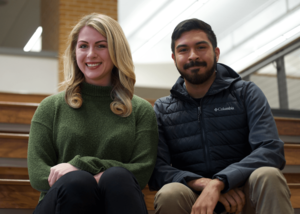 In a campaign characterized by lofty ideas, Eduardo Luna and Haley Coleman promise pragmatism. As a team, the two juniors seem to balance one another.

Although Coleman is currently a part of the Junior Class Council, she has no other student government experience and hopes to offer the fresh perspective of an outsider. Luna, on the other hand, boasts three years of student government experience. He was elected to serve as senator for Knott Hall his sophomore year and is currently the co-director of student life, a position which he has used to help orchestrate events such as Flick on the Field. Luna is also a fixture in Campus Dining. He began working at North Dining Hall during his first year on campus and is now the Senior Student Manager, overseeing the payroll and scheduling of more than 60 student employees.

Fittingly, a large facet of the Luna-Coleman  platform is dining. More specifically, these candidates hope to make the campus dining experience more inclusive for students of different cultural backgrounds. They aim to do this by utilizing Luna’s relationship with Campus Dining’s council of chefs in order to introduce new, diverse dining options that would be regularly featured in the 28-day meal rotation.

The duo also wants to take on an issue that is seldom discussed despite affecting almost three quarters of the campus population: assured housing for students returning from studying abroad. After almost losing her spot in Farley after returning from a semester in Washington, D.C., Coleman realized there was room for improvement in the housing system. The two hope to collect benchmark information on how the situation is handled by each rector on campus before proposing a plan to the administration  that would standardize the process.

The platform’s boldest push is for free laundry services. Although previous tickets have tried and failed to accomplish this goal, Luna and Coleman believe that the objective is attainable because they have determined a source of funding for the project: a reserve of savings, allocated to the auxiliary operations division, that accumulates with each year. Money from this “rainy day fund” has been used to finance such projects as the recent renovation of North Dining Hall and the construction of the mediterranean restaurant in the Hesburgh Center.

Ultimately, Luna and Coleman hope to erase some of the disconnect they perceive between the student body and student government. They want to work to engage with constituents and improve transparency. Though there are many barriers to effective communication, they have attempted to tackle some already by reaching out to more than 80 student clubs to gain perspective on their needs. If elected, they plan to hold open committees in order to glean insight from students that are not part of student government, as well as host regular office hours and monthly addresses.

This ticket is all about practicality. In Luna’s own words, their goals are “lofty enough to make a difference, but also reasonable and realistic,” and chiefly attempt to respond to student needs.