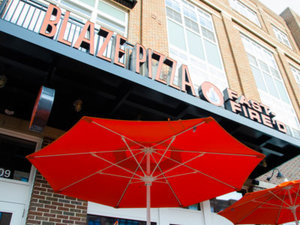 At Blaze Pizza, every night is make-your-own-pizza night.

There’s a lot to like about the new restaurant: fresh-made pizza, choosing your own ingredients, and getting your pizza back piping hot in just 180 seconds.

Senior Cami Mampieri says she liked the crunchy, thin crust. “Having just studied abroad in Italy, it reminds me of the Roman-style thin crust, but I like that you can personalize the pizza. All the ingredients are really good.”

It was freshman Peter Sinkovitz’s first time in Blaze, but the first-year says he would definitely be coming back. “I got almost everything [on my pizza],” he says. “It’s nice because you don’t feel like you’re missing anything.”

For those who don’t want the hassle of choosing their own ingredients, Blaze offers a number of “signature pizzas” to select from. For those who prefer the personalized pie, the Blaze menu has an extensive selection of meats, cheeses, sauces, veggies and garnishes,-- including sea salt and oregano.

“I really like this place,” senior Anna Brown, who enjoyed a custom-made pizza, says. “I’ll probably get the same thing when I come back.”