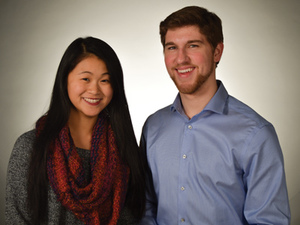 Mental health will be the “overarching crux” of the campaign as juniors Dom Alberigi and Jenn Cha mount their run for student body president and vice president, Cha says.

And while mental health is their focus, the duo have ideas for all aspects of campus life – some down-to-earth, some downright dreamy. To name just a few, Alberigi and Cha hope to create permanent animal therapy rooms, install movable campus murals, reform the dining hall swipe system and replace Burger King with a sit-down restaurant.

They bring contrasting backgrounds to the ticket, which they say represent perspectives of the student body.

Alberigi  – a resident of Alumni Hall who hails from the San Francisco Bay area  – studies finance and says he’s “huge” on marketing and image, which will help him persuade the administration to help with their plans.

“Being able to convince people that this is in their best interest is my thing,” he says.

Cha, on the other hand, is an American Studies and English double major, minoring in Africana Studies as a Balfour-Hesburgh Scholar. The Welsh-Family junior is passionate about social justice; she’s vice president of PrismND, a representative of Diversity Council and Take Back the Night ND/SMC, an advising fellow for Matriculate ND and has researched drug abuse in her hometown of Baltimore, MD.

The animal therapy would be installed in the Knights of Columbus Building or a yet to be determined space built in the upcoming campus expansion, Cha says, with one room for cats and another for dogs (to keep allergies separate).

If elected, they’d also create “a simple app that is everything mental health,” Alberigi says, with appointment schedules, a 24-7 chat and phone hotline and links to resources. “Everything you can think of mental health on one simple app that we can develop within the first part of our term and release to students when they arrive at Notre Dame,” he says.

Cha’s brainchild is a set of movable, outdoor murals – she says, “basically an art space that would be colorful, vibrant, beautiful.”

The concept is rooted in a concern for mental health. “When you walk around campus and everything is the same color, it’s so demoralizing,” Cha says.

Alberigi says dining hall reform is nothing groundbreaking, but it’s essential. They want to institute a point system, where meals roll over longer than a week and students aren’t constrained to set meal times. They’d also like to create a healthy food cart in DeBartolo Hall to supplement what they say are minimal offerings at ABP.

More ambitiously, they propose turning the Lafortune Student Center Burger King into a sit-down restaurant. Right now, Alberigi says, “There’s only fast food and Sorin’s. Like, can we get somewhere in between, please?”

The duo emphasized that  the restaurant’s sit-down area would open up to studiers at a certain point each evening and added that they’d be open to other restaurant options if the student body didn’t support their plan.

Alberigi and Cha want to create a student government accountability app to increase transparency. “A lot of the quote-unquote ‘transparency,’ that goes on right now is buried in long emails that personally, if you’re an average student,” Alberigi says, “you look at this and go like ‘uck’ and just delete it.” They hope their app will streamline communication.

Cha also wants to create a monthly or bimonthly platform to hash out contentious issues. For students who aren’t in the College of Arts and Letters, Cha says, there’s little access to formal, respectful discourse on controversial topics.

She drew inspiration from the recent Black Lives Matter event; attendees told event organizers they were drawn to the controversial nature of the topic.

“We’re not interested in having, you know, very vanilla, PC speakers come to campus,” she says.

They hope to start university-wide conversations about sexual assault, Title IX, gender-neutral bathrooms and the Columbus murals in the Main Building. Their platform also includes plans to divest from fossil fuels, improve gym equipment, fund student “passion projects” and hire a hairdresser that knows how to work with ethnic hair.

“Overall,” Alberigi says, “it’s this idea that we need to create an environment that is extremely, above all, supportive, inspiring and elevating.”