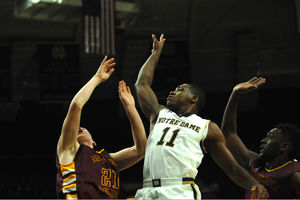 Sophomore point guard Demetrius Jackson walks to his classes, just like the rest of us. The sidewalk beneath the sophomore point guard’s feet is covered with leaves so heavily trodden they look like fossils etched in by design. The trees at his sides reach out, barren skeletons and frost sometimes huddle together just around the path. Jackson’s walk to class in the fall is a little different from the late months of summer  —  sidewalks fresh after months of sun and infrequent human contact.

Jackson doesn’t like to talk about the circumstances that landed him in foster care. He’s previously said it was a rough time in his life, and that he was headed down the wrong path. Basketball was his escape — a way out.

Jackson was fluctuating between foster homes when Michael Whitfield, a friend and teammate on Jackson’s seventh grade AAU basketball team, found a way to help. Whitfield asked his parents, Dave and Beth Whitfield, if Demetrius could come live with them. Soon after, Jackson moved in, and before long, he fit in well with the rest of the family.

After playing at Marian High School in Mishawaka, alongside two of his foster brothers, Jackson earned his spot as a McDonald’s All-American — an enormous honor. In the All-American game, he played alongside now-NBA lottery picks stars Jabari Parker, Andrew Wiggins and Julius Randle.  In some aspects, he shined even brighter than these future stars at the All-American game: Jackson won the halftime skills contest as well as the Jack Daly Sportsmanship Award.

Because of his success in high school and status as a highly regarded recruit, Jackson’s first year at Notre Dame remains one of the most highly scrutinized in recent history. Picked and prodded by the fans and media while playing backup to veteran point guard Eric Atkins, Jackson underwhelmed on the court, averaging 6.1 points, 2.4 rebounds and 1.8 assists per game.

Jackson says this stint behind Atkins on the depth chart “helped me out a lot. Not only [Atkins] talking to me and telling me things, but also just watching him, he was a great guard to watch.” Senior guard Jerian Grant says that “[Jackson] didn’t know what his role on the team was going to be.” The stark contrast from Jackson’s role last year to this one shines as plainly as the difference between the seasons in South Bend.

This year, Jackson seems completely transformed. He changed jersey numbers from 23 to 11. He’s averaging 12.6 points and shined in the team’s overtime win against then No. 19 Michigan State. Jackson scored a career-high 22 points and played relentless defense. This is the player Notre Dame fans expected Demetrius Jackson to be.

His finest attributes — quickness, ball handling and stingy defense — indicate an intense competitor that has churned out hard hours of practice and desires winning over statistics. Grant says, “ [Jackson] is confident now. He knows the [point guard] spot is his.”

With elevated confidence and a new mindset, Jackson can be seen barking commands on the court, prodding his team on to victory. On his new role, Jackson says, “Anytime I have something I think could be useful for the team, I make sure I say it and help lead.”

We are witnessing the rise of a leader and a star — the transformation of Demetrius Jackson.