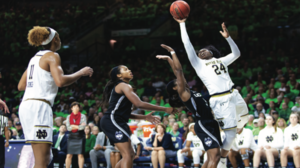 The WNBA is now home to stars from the 2018 national championship and 2019 national runner-up teams: Jackie Young, Arike Ogunbowale, Brianna Turner, Jessica Shepard and Marina Mabrey, who together accounted for over 92.7% of the team’s scoring last year. Now, Notre Dame is entering the season with a new core of players looking to make their mark on the program.

“I feel like we’re certainly in the early stages where everybody’s kind of trying to find their way,” Associate Head Coach Beth Cunningham said. “I think the biggest thing with this group is we’re just going to get so much better from game to game, week to week, month to month as we progress throughout the season.”

This year, freshmen Sam Brunelle and Anaya Peoples are expected to hit the ground running, as both are on the ACC Newcomer Watch List. Brunelle, the Gatorade Virginia Player of the Year and USA Today Virginia Player of the Year, won the three-point competition at the McDonald’s All-American game. Peoples was also a McDonald’s All-American and was ranked No. 21 in last year’s recruiting class.

Graduate transfers Destinee Walker and Marta Sniezek, from North Carolina and Stanford, respectively, are also expected to make an immediate impact. Walker, a five-star recruit out of high school, averaged double figures as a freshman and sophomore at UNC but did not play her junior year and played limited minutes as a senior. Sniezek earned a Pac-12 All-Defensive Honorable Mention nod and started 32 games as a junior before suffering a thumb injury that sidelined her as a senior.

As for Notre Dame’s returners, junior Mikayla Vaughn, as well as sophomores Katlyn Gilbert and Abby Prohaska, are expected to provide more experience in a Notre Dame uniform. Last year, Vaughn played 9.6 minutes per contest, averaging 3.3 points and 2.4 rebounds. Gilbert averaged 3.6 points per game through seven games before being sidelined for the season with a shoulder injury. Prohaska was the only guard to come off the bench during the 2019 NCAA Tournament and started three games throughout the season.

But just as Prohaska looked able to lead the team with her experience, she was diagnosed with a bilateral pulmonary embolism in October. The diagnosis, which means that Prohaska has a blood clot in each of her lungs, will sideline her indefinitely.

“I will be right alongside this team for every game I cannot play,” she said in a Twitter post announcing her diagnosis. “This is just a bump in the road.”

Without Prohaska, the young team made its debut on Tuesday, Nov. 5 at Fordham, holding off a late surge from the Rams to win the season opener 60-55. As expected, Brunelle opened her college career with a strong performance, finishing with 14 points. Gilbert also tallied 14 points, followed by 11 points from Peoples. As for the pair of graduate transfers making their debut, Walker notched a double-double (10 points, 10 rebounds), and Sniezek led the team with six assists.

“There were definitely some nerves there, but as the game continued on, I lost those,” Brunelle said about her first college minutes. “You want to win, so that’s what you’re focusing on, and hopefully we can just keep that mentality throughout the whole season — just win, win, win.”

The team picked up its first win but suffered another blow when Vaughn sprained her right knee in the contest, an injury that will sideline her for four to six weeks.

The loss of experience offered by Prohaska and Vaughn will add to the challenge the coaching staff faces in developing this year’s team. Luckily for the Irish, the coaching staff is one of the most seasoned in the sport, even with the departure of Associate Head Coach Niele Ivey for the Memphis Grizzlies. New assistant coach Michaela Mabrey, class of 2016, was a two-time captain and played in three Final Fours and two national championship games during her tenure with the Irish. Additionally, Kayla McBride was named player development program manager, giving her the chance to work with players off the court in a supporting role.

Cunningham said having recent alumni of the program on staff allows for a sense of experience on the floor, as Mabrey and McBride aren’t far removed from their own playing days. She added that the coaches have relied more heavily on film archives to develop into collegiate players without the guidance of the more seasoned players.

“They know what the people before them have done, and we can show them things on film of the things we’re trying to do and show them people that have done the same thing,” Cunningham said. “They’re just getting thrown right into it, so they don’t really have anybody to watch to see how it’s done.”

The young squad will be tested by a slew of ranked opponents, facing its first of the season, No. 17 Michigan State, on Nov. 14. The Irish will also take on No. 5 UConn on Dec. 8, and ACC opponent No. 9 Louisville on Jan. 30.