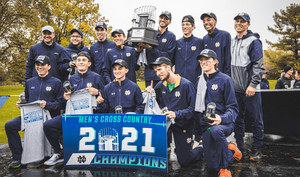 Two in a row: The men’s cross country team has now won back-to-back ACC Championships after a dominant performance on Oct. 29. Their 32 points placed them well ahead of runner-up Syracuse, who tallied 84.

ACC Tourney: The men’s soccer team finished the regular season with a 9-5-2 record, winning eight of its 10 home matchups. Jack Lynn leads the team in goals and points, with seven and 17, respectively. Matthew Roou has tallied six goals, followed by Dawson McCartney and Eno Nto with five each.

The Irish beat NC State 1-0 in the first round of the ACC Tournament, then advanced to the semifinals on a 3-0 penalty shootout against Louisville. Goalkeeper Bryan Dowd was responsible for a pair of saves in the shootout to help advance the Irish to a semifinal matchup with Pitt on Nov. 10.

To the tournament: The women’s soccer team put together a 13-4-1 regular season that featured a 9-1-1 home record and only three conference losses. But a disappointing early exit from the ACC Tournament after a 3-2 loss to Clemson left them waiting for the selection show on Nov. 8.

The Irish were awarded a No. 3 national seed in the NCAA Tournament and will host SIUE on Sunday, Nov. 14.

Heading into conference play: The hockey team opened its season with three wins over Long Island University, Michigan Tech and Northern Michigan. The Irish suffered their first loss, a 3-2 overtime loss to Rochester Institute of Technology, before rebounding with a 6-0 victory the following day. Most recently, Notre Dame dropped a pair of road games to No. 5 Minnesota. The Irish rebounded from the pair of losses with a home sweep of Holy Cross. Graham Slaggert and Max Ellis turned in solid performances on the weekend, each scoring two goals across both games.

Through nine games, Max Ellis leads the Irish with five goals and is tied for the team lead in assists with six.

The Irish open their regular season on Nov. 9 against Ohio.