Building a contending program is like scaling a mountain. No matter how much progress one makes with each successive step, genuine satisfaction is naught until the pinnacle is reached.

Halfpenny also has a distinct demeanor that breeds an aggressive edge and mentality on the field. Her coaching style is demanding, and she preaches pedal-to-the-metal toughness. It translates to the field, as Notre Dame outshot opponents by nearly 100 attempts last season and committed nearly 150 more fouls while causing nearly 70 more turnovers than opponents. As a former assistant at Duke, her teams reflect the elite tradition and high levels of fierce competition fostered in the ACC.

Year four in the current coaching leadership’s tenure should be the true barometer of this program’s progress in measuring up to the top teams in the country. The Irish are ranked in the top 15 this season and were as high as No. 6 in the nation in a 13-5 2012 season. These are impressive feats, but how can one really judge success in sport? Clearly, regular season consistency is no longer enough. The Irish have crossed that bridge and there is no going back. Now, regular season success is only an assumed prerogative.

The only option for Notre Dame now is to advance past the second round of the NCAA Tournament. Notre Dame suffered defeats to seven-time national champion Northwestern in the first round of the 2012 season, No. 20 Stanford in 2013, and No. 8 Duke in the second round last season. Two of the three losses were by a combination of just three total goals. This team is close to overcoming deficiencies, but looking back to prior results will clearly not help much in 2015.

This team features a group largely dominated by non-seniors. The current junior class has proven to be one of the best recruiting coups in recent memory. The mainstays are back — junior midfielder Kiera McMullen, junior Rachel Sexton and sophomore Courtney Fortunato. 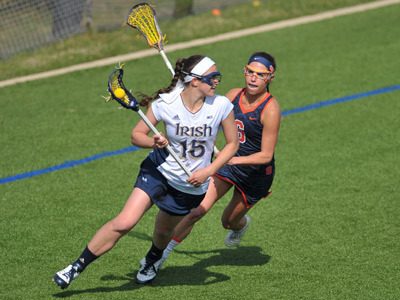 Sexton has blossomed into a potent attacker. Her 33 goals last season formed an overwhelming swarm of offensive firepower with last year’s National Rookie of the Year, Courtney Fortunato. Fortunato notched 63 points last season, the second most out of any rookie in program history behind Jillian Byers. Additionally, Grace Muller is a rising star in the attack line, with 10 goals in 18 games in 2014 and seven goals in just two games so far this season.

But the real catalyst to all of this anticipation is senior defender Barbara Sullivan. When Sullivan is in the lineup and cleared from injury, she is the unmatched force that drives this team. Independently, she can influence the entire back line.

“Does Barbara go rogue? Absolutely. Does it work out for her and our team? Nine times out of ten it absolutely does and we’ll take those odds any day of the week,” Halfpenny says.

Sullivan sat out most of last season with a back injury and the team finished just one game above .500. She has over 40 starts in her career, is an All-American defender and has over 100 draw controls and ground balls in each analytical category. A standout campaign by Sullivan can provide a buffer for the young Irish goalies, sophomores Liz O’Sullivan and Jennifer Blum, and can mask inexperience or deficiencies by defending midfielders on Notre Dame’s defensive side of the field.

The schedule Notre Dame plays will have no room for shortcuts. An ACC team has played in the National Championship in each of the last six seasons with Maryland and North Carolina winning the last two titles. The Irish must stand up to the ACC perennial powers at least once. Out-of-conference matchups with Northwestern and Ohio State will also test how the Irish measure up with ranked opponents.

“We’re also getting in here up-and-coming programs with outstanding coaching staffs and we’re getting that strong battle that we know we need so we can prepare for the ACC tournament and the NCAA tournament,” Halfpenny says.

The Irish have arrived at that final foothill. But the task to overcome it will take a consistent output of the intensity, focus and execution that has been displayed in spurts over the last four years.