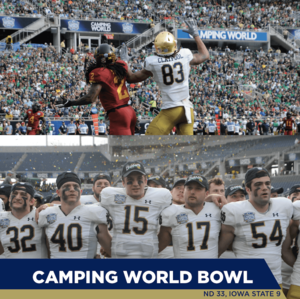 Prior to Notre Dame’s appearance in the Camping World Bowl against Iowa State, there was little conversation about the game itself. Instead, most of the chatter surrounding the Fighting Irish program centered on off-the-field circumstances.

First, many believed the game was an informal audition for Tommy Rees, who seemed to be the leading candidate in the search for a new offensive coordinator. Second, many Irish fans felt the team had been disrespected once more by drawing a 7-5 Big 12 opponent. Third, many fans and onlookers speculated that some players could forgo the NFL draft, opting for another year of eligibility at the college level. Most notably, fans wondered whether senior quarterback Ian Book would return for another season.

There were rumblings from the media prior to kickoff that the Irish were not ready to play in a bowl game, and the public seemed to back this sentiment by making Notre Dame one of the trendiest upset picks throughout the bowl season.

Head coach Brian Kelly knew that his team was facing a talented opponent, offering in the final press conference before kickoff that they are a “very dangerous football team week in and week out.”

As soon as the game started though, the Fighting Irish appeared locked in and focused on their way to the 11th win of the season in a 33-9 rout of the Cyclones. It was not long before the game seemed to favor Notre Dame from a talent, physicality and coaching perspective. The only advantage that Iowa State appeared to have in Orlando was the size of their crowd, one that showed up in great numbers and made plenty of noise throughout the game.

While the offense started slow after receiving the opening kickoff, it was the special teams unit that came up with the first big play of the game when senior safety Alohi Gilman stripped the ball, which was then recovered by senior wide receiver Chase Claypool. Although Notre Dame was forced to settle for a 39-yard field goal from Jonathan Doerer, it certainly brought excitement back to the sideline.

On the ensuing Iowa State possession, the defense was struggling to get a stop when junior linebacker Jeremiah Owusu-Koromoah came up with the second fumble recovery of the game after he stripped Cyclone quarterback Brock Purdy. Once the ball was back in Book’s hands, the offense appeared determined to score the first touchdown of the game. After a quick drive down the field, the offense did just that when Claypool made a spectacular touchdown grab to secure a 10-0 Notre Dame lead.

The defense was stellar throughout the game, conceding just 45 rushing yards and 9 total points to an explosive Cyclone offense that scored in bunches against College Football Playoff caliber teams. After a 51-yard Doerer field goal, one that certainly did not look pretty, and a touchdown run by junior running back Jafar Armstrong, the Irish took a commanding 20-6 lead into halftime.

With the ball in their hands to start the second half, Iowa State had a chance to cut into the Notre Dame lead and make it into a competitive game once more, but the defense provided another three-and-out to set up a quick touchdown drive.

That drive lasted just 15 seconds as senior running back Tony Jones Jr. took the first play from the Notre Dame 16-yard line to the Iowa State end zone for the longest rushing touchdown of his career. Furthermore, it was the longest rush in the Camping World Bowl in its entire storied history.

While the remainder of the game just saw Notre Dame pad its lead with field goals, the offense and the defense appeared dominant in a rout of a quality opponent in Orlando. There were many players deserving of the MVP award, but Claypool’s stellar performance, which included 146 receiving yards (enough to put him over the 1,000-yard mark for the season) and a touchdown (possibly could have been two after a controversial call marked him down at the one-yard line), as well as a fumble recovery, earned him the award.

Although some of the Notre Dame fan base may complain about the numerous field goals the Irish were forced to take, Rees did a masterful job calling the game in his first time ever as the play-caller. Further, defensive coordinator Clark Lea proved why he is one of the most underrated coaches in the country once more as his defense stepped up big.

After the game, Kelly had one common thing to say: “You read this team wrong.” Who he was talking to — the media, the fanbase or the CFP committee — will be up for debate, but one thing is clear: Notre Dame is challenging for consistency and relevance among the top 10 once more.

They did not listen to what the naysayers had to say about them — the negative tone, the negative people out there. All they cared about was playing the game. It was clean. It was about competing, always looking to better themselves. - Coach Brian Kelly