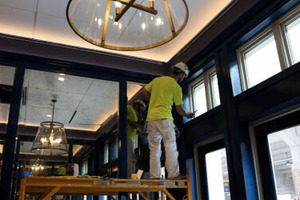 The full opening of the Campus Crossroads project, originally set to open in spring 2018, has now been delayed by 60 years. Duncan Student Center, Corbett Family Hall and O’Neill Hall will remain closed for the duration of the school year, according to representatives of the project.

“At the beginning of next year, we will begin to open a single room at a time,” said Rev. John I. Jenkins, C.S.C., the mastermind behind the project and the overlord of the University. “This is a big deal, and we want to fully emphasize how big of a deal it is. One room per month for 60 years. At least, that’s the plan. We haven’t really done the math on it, so it could potentially be postponed further.”

The first room to open will be a storage closet on the third floor, and the last will be the coffee house in Duncan Student Center.

John Brown, a junior at the University, is quoted as saying, “Are you kidding me? Are you kidding me? I’ve never seen campus without construction around the stadium and now I’m not even going to get to see the end result.” He continued to complain for two hours about the greed of the university and how Fr. Jenkins “is a goblin.” The Scholastic editor interviewing him left to get dinner, and he continued to complain through the night to no one in particular.