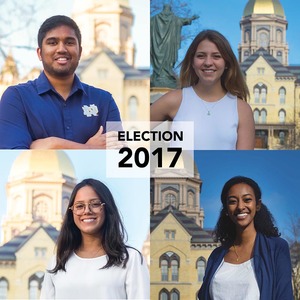 Each morning’s headlines read as a chronicle of warring factions on either side of the aisle. Republicans versus Democrats. Establishment versus outsiders. Young versus old.

Washington is a battleground.

On campus, however, the spirit of political compromise still reigns. The two tickets for the next year’s student government elections are made up of six friends, many of whom have had shared experiences in student government going back to their first years on campus.

Shewit and Fonseca have been working together since their time with the First Undergraduate Experience in Leadership (FUEL). Blais, Shewit, Fonseca, Narimatsu and Purrenhage all met working with Student Body President Brian Ricketts and Student Body Vice President Nidia Ruelas during the 2015-2016 academic year.

Despite these shared experiences, the two tickets promise different approaches and distinct platforms.

Fonseca and Narimatsu cite their geographic and political differences as fundamental to their focus on diversity. They say their platform goals — which focus on civilized discourse within the student body — are tangible and necessary given today’s polarized climate.

They run against a ticket that has been within the innermost circle of student government for the past two administrations. Shewit served as chief of staff for the second half of the Ricketts-Ruelas administration; this election cycle is, of course, Blais’ ascension to the top name on the ticket, following her year as vice president. Their pitch is that their experience means they are ready to hit the ground running. Many of their platform goals have been in the works for the past year.

The two tickets’ challenges are formidable. Fonseca-Narimatsu need to find a way to make the vague aspects of their platform clear and able to be implemented, a challenge that could only increase if they do not succeed in bringing together warring voices on campus. Blais-Shewit must prove that their sometimes lofty goals have chances of succeeding, particularly after a year in which some initiatives garnered no publicized traction under Blais’ current administration.

While the spirit of political compromise is still thriving within the so-called ‘Notre Dame bubble,’ students have an opportunity to implement important, acute change through their votes in this election.

Experience working within the system and tendency to push its boundaries

Becca Blais and Sibonay Shewit know what it takes to run student government. The juniors have each served as members of the executive cabinet and wish to continue their streak as office holders next year.

As a sophomore, Shewit first was secretary, then chief of staff of the Ricketts-Ruelas administration, while Blais has worked alongside Corey Robinson as student body vice president for the past year.

“When I was secretary, I really got to see what student government does and what they can do,” says Shewit. “And then when I became chief of staff, I saw where the potential was if we had more time or if we realized earlier, and it’s kind of a hard position to be.”

“We won’t be holding our punches,” Blais said. “We’ve already learned most of those lessons.”

Blais and Shewit’s platform contains further structural reforms to build upon the Robinson-Blais administration’s initiatives. One area the platform seeks to improve is the diversity and inclusion training offered to resident assistants before the school year begins, which Blais says is “completely ineffective.”

“Once I was secretary and I saw a lot of the changes we tried to do — especially diversity and inclusion, which is really close to my heart — it really inspired me to see more of it,” Shewit says.

The platform does not solely deal with the weeds of policy. Blais and Shewit also plan to start new student-centered programs.

Blais is working on creating a South Bend internship pilot program with partners at the Career Center and the South Bend Chamber of Commerce. The program is in the trial stages but seeks to match Notre Dame students with local businesses for a six-week shadowing experience.

The idea began as part of the Robinson-Blais platform, but Blais and Shewit wish to expand upon the initiative in the next term.

“[The goal is] building off of that and making sure it’s not just a pilot program that gets forgotten, but an actual sustained internship relationship with South Bend and Mishawaka,” says Blais.

One loftier goal is the proposed Lyft partnership. Blais says she has spoken with representatives of the ridesharing company and its chief competitor, Uber, about creating a student discount to encourage safe and affordable passage back to campus during peak off-campus party and bar times.

The issue of sexual assault is the reason Blais chose to run for vice president last year and remains central to her platform this year.

Blais promised to continue with her 2016 campaign promise to install a Sexual Assault Nurse Examiner trained to administer rape kits at St. Liam’s.

“It is downright neglectful that we do not have them here,” she says.

“Reach. Reinvent. Represent,” is what Blais and Shewit chose as their campaign slogan.

These words capture their goal to reach beyond what they have done previously; their new goals include reinventing the structures of student government and representing all students by being “the loudest possible voices.”

“You are not going to learn what it's really like until you're either president or vice president or chief of staff and you're the ones meeting with administration,” says Blais. She claims that she completed “three-fourths of [her] platform in the first month,” as vice president last year.

She added, “So we already know what to do, and we can do 10 times as much as any student government has ever done here.”

Depending on how the students vote on Feb. 9, Blais’ confident claim may be put to test.

Interest in representing all students and emphasis on unity across campus

Their campaign, managed by junior Program of Liberal Studies major Madi Purrenhage, is so diverse that they “represent every single member of the student body,” according to Narimatsu. This diversity applies to both thought and political leanings as well, and Narimatsu believes they “wouldn’t run for anything together in actual politics.” Narimatsu, Fonseca and Purrenhage represent the liberal, moderate and conservative ends of the political spectrum, respectively.

Fonseca hopes to implement two unique programs that he says represent a “completely new way of looking at diversity.” The first, dubbed Irish Connection, would “create events that allow mixing of student groups that wouldn’t otherwise occur,” such as friendly basketball games between the Knights of Columbus and Wabruda (the black male student organization). The second initiative — called Roundtable — was “motivated by the recent presidential election cycle” and would bring students together in a common area for moderated discussions “to address pressing concerns on a college campus,” Fonseca says.

Other platform highlights include the ND Experience, a planned upperclassman-led bus tour for new students highlighting South Bend’s off-campus offerings, and an emphasis on sustainability, which would include physically weighing food waste in the dining halls to create a tangible representation of excess.

When asked how their administration would compare to the current term’s, the team praised Robinson and Blais for their transparency and follow-through on promises, something Fonseca and Narimatsu plan to continue. They also intend, however, to make more of an effort to connect with students in their everyday lives. The biggest problem on campus, according to these candidates, is a lack of conversation and discourse. Part of their platform focuses on bridging those gaps — for example, by encouraging people to attend or host events outside of their typical circles. Although Notre Dame boasts a wide array of representative clubs, Fonseca says their events are often attended by “only certain people who align with the demographic of that group,” Fonseca and Narimatsu would aim to increase the diversity not just of the clubs on campus, but also of those who actually attend their events through programs like Irish Connection.

The two candidates agree that Notre Dame’s biggest strength is its people — “the Notre Dame family,” as Fonseca puts it. Their choices of role models speak volumes about how they intend to relate to their Notre Dame family as student body leaders: Narimatsu admires the late Rev. Theodore M. Hesburgh, C.S.C. for following his instincts about what was best for the university — particularly the admittance of women — and pursuing that vision relentlessly. “We have a vision that we want to implement,” she said, “and you shouldn’t give up on the vision that you have.” Fonseca cited Pope Francis as a model for his ability to walk the walk when it comes to his beliefs and values and for “finding a way to make [those] tangible,” — most recently by washing the feet of refugees. Fonseca admires Pope Francis’s ability to “show that love to the world,” and to “show the world that actions speaks louder than words.”

In terms of the challenges they will likely face, the ticket also discussed how they plan to resolve potential red tape administrative clashes. Narimatsu emphasized the reality of picking one’s battles and sometimes “accepting that there’s nothing you can do... You’re dealing with bigger powers and shifting your efforts to something more tangible.”

One such instance has already occurred with their initial idea of providing STD tests on campus. They later eased up on their stance; Narimatsu says they “just didn’t feel comfortable promising” such a progressive development in anticipation of the potential roadblocks, and they’ll instead opt to simply offer more resources for STD and STI information.

Fonseca says, “We know [where] the university stands on that.”