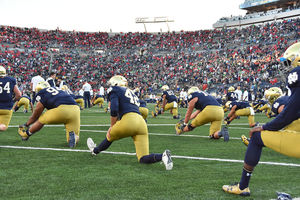 On New Year’s Day, the Fighting Irish defeated a Southeastern Conference competitor in dramatic fashion, coming back from an 8-point deficit to clinch a 21-17 victory. Following a dismal 4-8 campaign in 2016, the Irish rebounded to complete a 10-win season.

The victory celebration was short-lived.

Within one week of the Citrus Bowl triumph over LSU, running back Josh Adams and wide receiver Equanimeous St. Brown decided to forgo their remaining college eligibility and enter the NFL draft.

The senior class, highlighted by All-American offensive linemen Mike McGlinchey and Quenton Nelson, will no longer see the field for the Irish.

Roster turnover annually haunts every college football program, but a talented recruiting class puts the Irish in position to sustain their on-field success. Twenty-two recruits signed their letters of intent with Notre Dame during the early signing period in December, and the Irish currently have the No. 8 recruiting class in the nation, according to 247Sports.

Phil Jurkovec, a dual-threat quarterback from Gibsonia, Pennsylvania, highlights the 2018 recruiting class. When asked about Jurkovec, Irish head coach Brian Kelly raved about his newest quarterback. “He’s somebody that I would put up against any quarterback that I’ve seen,” Kelly said.

Jurkovec will join the depth chart with Brandon Wimbush and Ian Book, two quarterbacks who played well at times in 2017 but failed to securely grasp the starting role for next season.

“I’m going in, I’m competing. Nothing’s going to be given to me. So I’ll earn whatever I get,” Jurkovec told The South Bend Tribune.

Jurkovec has lived up to his dual-threat label, making plays with his arm and legs during his senior season at Pine-Richland High School. The four-star quarterback passed for 3,169 yards and ran for 1,211 yards, accounting for a total of 63 touchdowns on the way to a Pennsylvania state championship.

Oregon native Braden Lenzy, a four-star athlete projected to play wide receiver, will join Jurkovec on the offensive side of the ball in South Bend.

Lenzy initially committed to Notre Dame in February 2017, but decommitted from the Irish that June. “There was some confusion about whether I’d also be able to run track, which was something very important to me,” Lenzy wrote in The Players’ Tribune. “So, five months after I initially committed, I decided to flip to Oregon.”

The Irish reengaged talks with the Tigard high school standout. Lenzy made his official visit to Notre Dame in early December, and, despite the frigid conditions of the South Bend winter, Lenzy knew he was in the right place.

“There were a lot of reasons I felt like [Notre Dame] was the right choice for me, but ultimately it came down to a feeling,” Lenzy wrote. “This is what I wanted. This was the place I needed to be.”

Markese Stepp nearly joined the premier offensive talent coming to Notre Dame. Stepp, a running back from Cathedral high school in Indianapolis, committed to the Irish in June 2016. After his commitment, the in-state talent was heavily involved in recruiting classmates to South Bend.

Despite his early commitment and enthusiasm for Notre Dame, Stepp decommitted prior to the early signing period in December.

Later that month, Stepp signed with an Irish rival, the University of Southern California.

Stepp was not the only athlete to spurn the Irish in favor of the Trojans. Five-star wide receiver Amon-Ra St. Brown, the younger brother of Equanimeous, chose not to follow his NFL-bound sibling to Notre Dame. Instead, the No. 1 recruit from California will attend USC.

Defensive coordinator Mike Elko left the Irish for the same position at Texas A&M University, so defensive recruits will be playing for a different coach than the one they committed to.

Houston Griffith, a four-star cornerback out of IMG Academy, and Derrik Allen, a four-star safety out of Lassiter High School, are expected to reinforce the Irish secondary.

Despite the coaching change, Allen stands by his decision to attend Notre Dame. “Sign to a place [be]cause of their cultures and beliefs, not because of a coach,” Allen tweeted.

The Irish will add to their 22-man recruiting class during the February signing period. Offensive lineman Luke Jones flipped his commitment from Arkansas to Notre Dame prior to the new year, and the coaching staff is targeting several other key recruits to build a consistent contender in South Bend.