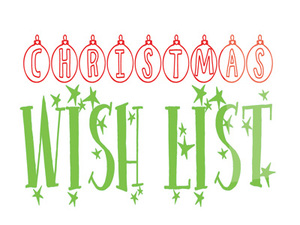 Well, the holiday season is finally upon us, after months and months of it basically being upon us, and everyone is clamoring (or just looking) to find that perfect gift that’s just appropriate enough for your dad that no one will notice when you use it way more than he does.

The problem: I’ve always had trouble finding gifts for other people. After all, we’re all already blessed with so many possessions. Sometimes it’s hard to not just revel in those possessions instead of shopping.

This year is going to be different, though, because this year I did my homework and came up with the ultimate Christmas wish list. It’s insightful. It’s exhaustive. It’s my ticket to Christmas history. That’s right, I’m gonna be partying it up with Rudolph and Hans Gruber, and you won’t even be jealous because you’ll have just gotten the perfect gift.

For a while, I considered keeping the list to myself. After all, I didn’t want a bunch of freeloaders stealing my great ideas after I had done all the heavy lifting, right? It just wouldn’t be fair.

I kept thinking about it, though, and I decided that Christmas is the season of sharing, giving and freaking out about cups. If this list was as jaw-droppingly fantastic as I thought it was (it makes the Bill of Rights look like “23 things only ‘90s kids will remember”), then it would be a crime to keep it private.  And besides, who cares who gives the gift if it’s the right gift?

So without further ado (or words), I present the greatest Christmas wish list to ever be printed (there are better ones in cursive, though).

When asked what he wanted, the Mendoza Dean promptly replied, “You could never afford it.” Millions of children inexplicably stopped believing in Santa immediately afterward.

Charlotte Denon wants a Tiffany engagement ring and for her boyfriend to stop dragging his feet and commit already.

Brian Kelly wants a bright red suit that he can wear to make his face seem like a more normal skin tone.

The kid that sits next to you in class with the beanie and the Buddy Holly glasses wants a Shins album that The Smiths then recorded over (he said not to worry though because how can you buy what you’ve probably never heard of before?).

The student workers with the late shift at Taco Bell just want to escape the things they’ve seen, but still the nightmares persist.

Donald Trump wants to know what it’s like to make a single mistake, while the Syrian refugees probably don’t want a present because it would be much too cold.

Your friend who just got back from London wants “DID SOMEONE ASK HOW LONDON WAS? OMG LONDON WAS SO GREAT THANKS FOR ASKING I HAD FISH AND CHIPS AND SAW BIG WEST AND BEN END AND I’M LIKE SO CULTURE…”