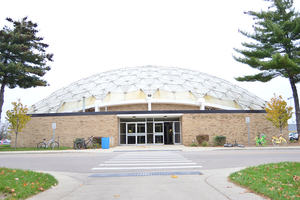 Chandler Sorin, the younger brother of Fr. Edward Sorin, has taken over the strange, geodesic dome of the Stepan Center and refuses to leave.

As a child, Chandler “Hush-Now-and-Listen-to-Ed” Sorin was overshadowed by Ed, the Golden Boy of the family. When Fr. Sorin announced that he was going to America to found the greatest university in the world, the University of Notre Dame, Chandler was overjoyed.

“Finally,” Chandler exclaimed, “I get the larger room!!” The joke was on Chandler, as Chandler’s parents gave the room to Chandler’s newborn baby brother, David, saying that the baby needed all that space to exercise. David was six weeks old.

The Sorin family received letters from Fr. Sorin, telling of his successes at Notre Dame, and Chandler was greatly dismayed. Unfortunately, it seemed that Ed could truly do no wrong.

Chandler journeyed to the United States and went to see Notre Dame and the “Golden Dome” that Ed was so excited about.

On a lovely, crisp fall day, Chandler was exploring campus and stumbled on perhaps the ugliest building he had ever seen: the Stepan Center. He had found Ed’s sole failure! Chandler ventured inside and, as a strong wind blew through, the door slammed shut and Chandler was forever locked inside. No one even noticed that he had disappeared.

Last week, an unsuspecting student entered the Stepan Center for the first time in over 100 years and saw Chandler floating around, damaging the Sorin family legacy. Leave it to Chandler to pick both the least-used and least attractive building on campus.

When asked to comment on his status as the worst brother in the Sorin family, Chandler only yelled, “Squatter’s rights!”

The Notre Dame Class of 2018 is currently petitioning for Chandler Sorin to be Fr. Jenkins’ advisor on the Campus Crossroads Project. They believe that a ghost of Chandler’s talent is better suited to the massive edifices that are taking over campus.