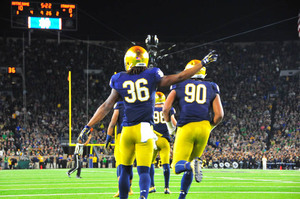 “It’s one of those things where you just — you’ve got to keep fighting, and we’ll get out on the other end of it. It’s a tough spot we’re in right now, but they’re committed. We’ll get through this rough spot.” - Coach Brian Kelly

With the way Notre Dame’s defense had been playing before its game against Stanford — allowing nearly 30 points per game through its first six contests — holding the Cardinal to 17 might have been good enough for a win. The offense had been scoring enough points to stay close in the losses and easily put away the wins. Christian McCaffrey, Stanford’s star running back who was once again putting together a Heisman-worthy season, was ruled out before the game with an undisclosed injury.

On this night, however, it was the offense’s turn to drop the ball. The Irish scored 10 first-half points to take what seemed like a dominant 10-0 lead into the half. The second half was another story entirely, as the offense turned anemic and could not score a point in the last 30 minutes of play.

In fact, while Notre Dame’s offense managed 10 points, they also cost their team nine. Two minutes into the second half, Stanford returned a DeShone Kizer interception for a touchdown and added two more points near the end of the quarter when the snap from center Sam Mustipher went through the hands of backup quarterback Malik Zaire and out the back of the end zone for a safety. Zaire had entered the game after Kizer threw his second interception of the game midway through the third quarter.

“[It] just felt like we needed to get some momentum back,” head coach Brian Kelly said after the game on his decision to replace Kizer with Zaire. “I thought [Zaire] could add some momentum.”

Kizer finished the game 14-for-26, passing for 154 yards and two interceptions and adding 83 rushing yards and a touchdown on 11 carries. Zaire did not fare any better, failing to complete either of his two passes and rushing three times for just three yards.

Kizer’s rushing touchdown capped off a six-play, 74-yard drive to get the Irish on the board in the opening frame. Justin Yoon added a 29-yard field goal to push the lead to 10-0 in the second quarter, which finished a 14-play drive that took nearly seven minutes off the clock.

Then the miscues began to pile up for Notre Dame.

Notre Dame’s first two drives after halftime resulted in interceptions, one of which the Cardinal returned to trim the Irish lead to 10-7, but defensive lineman Jarron Jones brought down Stanford quarterback Ryan Burns for the first sack recorded by a Notre Dame defensive lineman in the 2016 season. In doing so, he forced and recovered a fumble from Burns to give the Irish possession at their own 34-yard-line.

Zaire was put in the game after the fumble, but a holding penalty on the first play of the drive quickly halted any thoughts of momentum for the Irish. After a punt by each side, Stanford pinned the Irish at their own 5-yard line and the safety cut Notre Dame’s lead to a mere point.

On the ensuing drive, Stanford marched downfield on an 11-play, 67-yard drive that culminated in a 6-yard run by backup running back Bryce Love. Irish linebacker James Onwualu forced a fumble on the rush, but Stanford wide receiver J.J. Arcega-Whiteside scooped up the ball in the end zone for a touchdown (the play was reviewed and the ruling was upheld). Love converted a 2-point rushing attempt after the touchdown, the only score conceded by Notre Dame’s defense the whole game, to put Stanford ahead 17-10 with 10:38 left in the game, a lead they would not relinquish.

After the game, Kelly said, “I told the guys, this is the no-apology zone. Nobody needs to apologize to anybody because … it’s one of those things where everybody knows where we’re at; we’re 2-5, and we’re going to get reminded of it by everybody in the country about a million times. We’re 2-5, I’m 2-5, everybody is 2-5, so no one needs to apologize. What we need to do is coach better and execute better, and that will cure a lot of things.”

Player of the Game: Greer Martini