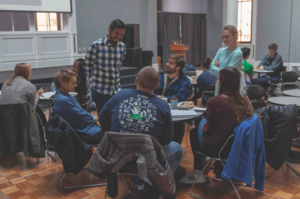 On Nov. 3, Campus Dining liaisons Eduardo Luna and Claire Marie Kuhn hosted a focus group to get student input on the University’s re-structuring of meal plans. Luna stated that over 99 percent of people with meal plans have the Gold Plan, which allows for 14 meals a week and 500 flex points per semester, and on this plan the average cost per meal is $11.66.

At the meeting Luna and Kuhn suggested reducing the number of meal swipes, switching to an unlimited meal swipe system, switching to an all-flex point system, going to a meal block system, or removing late lunch. These suggestions received mixed reviews from the audience.

Reducing the number of meal swipes without adding flex points was not a popular idea. On the other hand, an all flex-point system, wherein students could also use points in the dining hall, held merit for many. Luna suggested removing the late lunch period would be the most likely implementation as it would reduce student costs as Campus Dining would not have to pay to operate the dining halls for that period of time.

An all flex-point system, wherein students could also use points in the dining hall, was a positive idea for many. On-campus senior Brooke Kowalski wondered, “Why are we paying for other people’s meals?” Those who prefer to eat smaller meals or seek out healthier alternatives especially voiced that they believed they were not getting their money’s worth.

The meal block plan was also well received. This proposed plan could allow students to access to meals on a semester basis, instead of a weekly basis. If students used all of their meals early, they would have to go hungry until that semester finished.

The unanimous agreement that rang out above all others was that the dining plans should cost less money. David Carmack, a resident assistant in Fisher Hall, asked, “Why not just charge less and let people keep the money they would have spent on flex points? You’re not getting a dollar- for-dollar ration on flex points.” Other people in the room pointed out that flex points could be a way for people without discretionary spending to buy necessities in The Huddle.

The atmosphere changed when the conversation turned towards budgeting. Kuhn revealed, “Campus Dining does get its budget ultimately from the Board of Trustees.” Off-campus senior Patrick Krog summarized this issue: “They do not give Campus Dining 100 percent of the money that students pay to eat at the Dining Halls. That’s absurd. We pay for 14 meals a week and the University is only budgeting 8-11 meals a week.”

Luna concluded the discussion by saying “Ultimately, the Dining Hall is for you guys.” Time will tell if the administration shares the same idea.