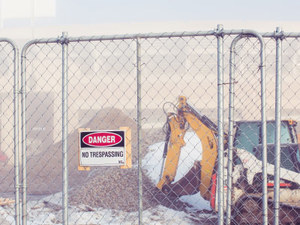 T-Swift’s new album 1989 is hot. I’m talking season three of Nip/Tuck hot. But it is not the sweet, smoldering melodies of America’s favorite angstress that has the campus abuzz. No, it is the symphony of cranes, backhoes and jackhammers emanating from Notre Dame Stadium that has become the go-to small-talk topic for Notre Dame’s most gregarious socialites. Whether at a dorm party, a local watering hole or alone with my pillow shaped like the state of Oklahoma that I drew a picture of my dog on and talk to on an alarmingly regular basis, this reporter has not heard a conversation all year that has not inevitably arrived at a mention of Campus Crossroads or my “creepy heavy breathing.”

As with any announcement of change at Notre Dame, the students, faculty and alumni showered the plans with categorical praise, with not even a single person voicing anything that could even be loosely construed as dissent.

The art deco behemoth comes as Notre Dame’s administrators strive to compete with other institutions in the top echelon of tertiary education, such as Harvard and Yale, which they see as both models and rivals.

Despite Lebsczana-whatever’s statement and what I said two paragraphs above, many critics have decried the football-focused layout portrayed in the concept drawings of the new student center with words like “kitschy,” ”sucks” and “antithetical to the university’s function as an institution focused on the advancement of humanity’s intellectual progress.”

“These attacks are not only baseless, but ridiculous,” Jenkins said. “Notre Dame is and will always be America’s Catholic university, a beacon of man’s potential in an ever changing world.”

Following a question about reports that professors would soon be required to wear referee uniforms and sell early 2000s Air Jordan’s to fourteen-year-old's during lectures in the new sports themed Campus Crossroads, Fr. Jenkins giggled with boyish charm and told the press corps, “Oh, you know I can’t tell you that. Ha ha!”

During a recent interview in what this reporter originally mistook for an abandoned utility closet, Prof. John Q. Chesterton, the Jerry Jones Chair for Early Renaissance German Aesthetics, was asked about the university’s $400 million endeavor.

“Oh, I think it’s marvelous,” Chesterton, audibly chewing on ice from a Burger King cup. “This is just what the university needs.”

Asked to clarify, Chesterton brushed aside his stringy comb-over twice, nervously yanked on his oversized tie and responded, “I haven’t eaten in three days.”

In choosing a location for Campus Crossroads, university officials said they turned to the only group that they could trust with high caliber decision-making: the Notre Dame Student International Business Council.  In a public statement last Thursday, an eager group of resume padding sophomores in the organization’s consulting division said they welcomed the challenge and that they believe they have found the best possible location in the entire universe for a campus center.

“I was really struck by the balance the stadium location offers.  On the north and west sides of the stadium lot you have West Quad, South Quad, God Quad, Mod Quad, North Quad, Debart, O’Shag, Bond Hall, the Main Building, LaFun, Jordan, Fitzpatrick, Hayes-Healy, Washington Hall, Como, the Rock and a number of other buildings; and on the south and east sides of the lot you have the athletic complexes and a parking lot.  So much synergy,” explained Chad O’McShoughnekeoughhan, a sophomore finance-finance double major living off-campus.

“What do I mean by ‘synergy’?  Sorry I don’t have time to explain I have to leave for an interview.”

With more thought and precision put into Campus Crossroads than any Notre Dame non-engineer could ever hope to grasp, most current students are left to dream of the benefits awaiting future classes of Notre Dame, as the university’s greatest expansion effort in its 172-year history is in the second of its 33 month construction phase.