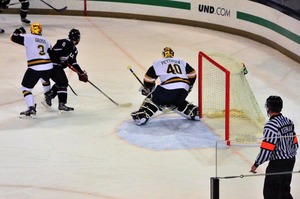 5 The NCAA-leading number of shutouts goaltender Cal Petersen has recorded this year. Petersen made 31 saves on Saturday, Jan. 21 to shut out New Hampshire 3-0 and extend the Irish’s current winning streak against the Wildcats to 4-0-1. Petersen has also started in 76 consecutive games, the ninth-longest streak in NCAA Division-I history. Notre Dame is currently ranked 17th in the latest USA Today and USA Hockey Magazine poll.

2 The number of Olympic Games in which senior foilist Lee Kiefer has competed. After sitting out the 2015-16 season to train for the Rio Olympics, the three-time national champion has returned to lead the Irish women fencers in the upcoming season. Kiefer went 8-0 at the NYU Invitational to move to 20-0 on the season. Currently ranked third in the nation, the Notre Dame women’s fencing team returned home to dominate the DeCicco Duals on Jan. 28 and 29, going a perfect 6-0 in matches over the two days.

7 The number of wins the Notre Dame women’s tennis team collected in their season-opening double header against Western Michigan and Wright State. The Irish won at every position, dominating in doubles against Western Michigan and singles against Wright State. The Irish opened up Atlantic Coast Conference play on Sunday, Jan. 29, with a 6-1 win against Pittsburgh.