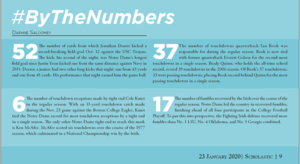 52: The number of yards from which Jonathan Doerer kicked a record-breaking field goal Oct. 12 against the USC Trojans. The kick, his second of the night, was Notre Dame’s longest field goal since Justin Yoon kicked one from the same distance against Navy in 2015. Doerer, a junior, had two other long kicks that night: one from 43 yards and one from 45 yards. His performance that night earned him the game ball.

6: The number of touchdown receptions made by tight end Cole Kmet in the regular season. With an 11-yard touchdown catch made during the Nov. 23 game against the Boston College Eagles, Kmet tied the Notre Dame record for most touchdown receptions by a tight end in a single season. The only other Notre Dame tight end to reach this mark is Ken McAfee. McAfee scored six touchdowns over the course of the 1977 season, which culminated in a National Championship win by the Irish.

17: The number of fumbles recovered by the Irish over the course of the regular season. Notre Dame led the country in recovered fumbles, finishing ahead of all four participants in the College Football Playoff. To put this into perspective, the Fighting Irish defense recovered more fumbles than No. 1 LSU, No. 4 Oklahoma, and No. 5 Georgia combined.