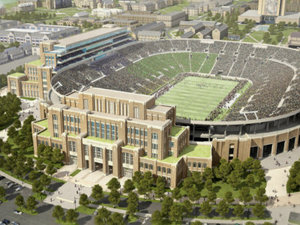 Notre Dame owns different forms of assets, but a source of major value for the university lies in the physical spaces on campus. Notre Dame’s facility growth has been astounding and only continues to increase. In 1988, the university contained about six million square feet of building space. Today, 40 percent of Notre Dame has been built in the past 25 years as the square footage of the campus has reached 10 million.

Additionally, according to the South Bend Tribune, the university is expected to spend an estimated $712 million before 2020 to add 1.3 million square feet of new facility space.

The process of building new facilities is not considered lightly. Notre Dame has implemented a construction funding policy, under which buildings are primarily funded by contributions from benefactors, and therefore, the funding of new buildings does not impact tuition costs.

The construction funding policy was created in 2000 by Malpass, Sejdinaj and Rev. Tim Scully, C.S.C., the former executive vice president of the university, and was approved by the board.

“We have a little more of a conservative approach to finances, which is consistent with our roots and heritage. A little more pay as you go, a little less leverage,” Malpass says. “The construction funding policy is one of the things that I’m most proud of because it put us in great shape.”

“When we put the policy in 10 years ago, I don’t think anyone else had it,” Affleck-Graves says. “A few of the major private schools have followed us. I don’t know any that have applied it as rigorously as we do. It’s a unique feature of Notre Dame.”

The policy was later revised to cover utility and maintenance costs. The current standard states that 110 percent of the total cost must be pledged before ground is broken.

Through the various ebbs and flows of the market, Notre Dame can remain steadfast in its projects because campus projects don’t impact the operating budget.

“Many people at other top universities thought [the construction funding policy] was absurd until the crash of the stock market in 2008, and since then, many of the top universities in the country have come and basically copied Notre Dame’s model,” Lou Nanni says.

The housing bubble burst of 2008 and resulting financial crisis affected many top universities.

“We had several projects going on during the crisis of ’08 and didn’t have to stop them because we had money,” Malpass says. “Harvard stopped a billion dollars plus of construction because they were borrowing or hoping to use donations from next year or endowment. They had to cut back on all of it and do layoffs. That was very typical.”

Aside from the construction funding policy, select utility and factory-style projects, such as tunnels beneath a road or piping, are financed by short-term debt commitments.

There have also been a limited number of revenue-generating projects such as the Morris Inn, completed in 2013, and the 750,000 square foot Campus Crossroads initiative, which is in progress adjacent to the football stadium.  In those rare cases, less than 100 percent of the funds were raised prior to the commencement of the building, but the revenue produced by the operational effects of the buildings make up for that deficit and may even generate excess, which is applied to financial aid support.

The university is approaching a goal of $200 million raised, of the $400 million total cost, for the Campus Crossroads project. The remaining $200 million will be financed by debt and covered by premium seat licenses sold. These club seats are an attractive incentive for the university’s decision to build Crossroads because of the anticipated revenues.

“What we were able to do was leverage interest in additional premium seats in the football stadium to help build two academic facilities and a new student center, with the new RecSports center,” Nanni says.

Financial wealth and stability are the backbone of Notre Dame’s financial system. The university’s unique approach to managing its funds has allowed Notre Dame to be more financially secure than at any point in its history.

The benefits of an institution like Notre Dame with such financial power are countless. In fact, the economic impact of Notre Dame’s employment, spending, students, visitors and research brought an estimated $1.67 billion in economic activity and 13,766 jobs to St. Joseph County in 2012, according to the annual report.