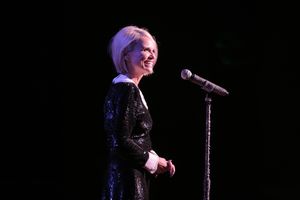 Kristin Chenoweth, Tony and Emmy award-winning singer and actress, performed in front of a sold-out crowd at Notre Dame last month. Chenoweth regaled her audience with Broadway, faith-based and original songs during her concert on Sept. 21, titled “An Intimate Evening with Kristin Chenoweth.”

As she ran onto the stage, Chenoweth’s black dress reflected the colors of the lights, reverberating with the applause that greeted her. With the first note from her legendary voice, the whole room was transported to the Land of Oz, cascading through mountains of operatic highs and lows.

“When she sang ‘Popular,’ I was like, ‘I could die now.’ I was so happy. It was incredible,” sophomore Julia Goldschmidt said.

Chenoweth’s popularity unsurprisingly drew a diverse crowd. Scattered among the audience of Notre Dame students were young girls gleaming with excitement, a woman clutching a Kristin Chenoweth bobblehead and at least one priest. According to a map provided by the ticket office, some hailed from as far as California, with others coming from Florida and Massachusetts.

Chenoweth is best known for playing Glinda in “Wicked” on Broadway, as well as for her performances in “You’re a Good Man, Charlie Brown,” “The West Wing” and “Glee.” Sean Martin, associate director of programming and engagement, said Notre Dame “chose Kristin Chenoweth because not only do we want to work with the academic departments, but we also want to have artists that will get the community excited.”

Between numbers, Chenoweth lived up to the promised “intimacy” of the concert, sharing jokes and personal anecdotes about her family, faith and Notre Dame. She spoke of her experience touring the campus and visiting the bookstore before the concert.

“We sometimes forget that these stars have a little bit of Notre Dame nostalgia as well,” Martin explained.

Chenoweth isn’t the last star who will appear at DPAC this year; future performers include another Broadway star, Renée Elise Goldsberry, who originated the role of Angelica in “Hamilton.” And for those who didn’t get the opportunity to see Chenoweth, both she and Martin expressed interest in another concert. “She can’t wait to come back,” Martin says, and “we’d love to have her back.”