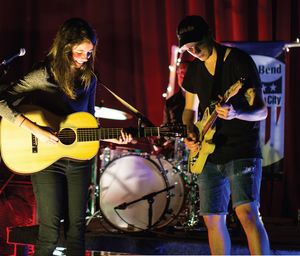 The Bridge Project wants to change the dynamic between Notre Dame and the surrounding community, and they’re doing it all to a sweet South Bend soundtrack. On Sept. 5, the Bridge Project put on a concert called the Student Expo, which featured bands from Notre Dame, IUSB and the South Bend community. Profits will go toward future projects, which help “cross the bridge” from campus to community. The concert took place in The State Theatre in Downtown South Bend.

Garrity McOsker, frontman of ND band Sober Sinners, says the blended South Bend audience at the student expo “made the show a blast for us.”

Will Murray, co-founder of the Bridge Project, says Notre Dame students have traditionally been closer with certain South Bend schools than others, referring to the “The Holy Trinity” of Notre Dame, Saint Mary’s and Holy Cross.

Changing the city’s dynamic, Murray says, will require “a vibrant local-student shared space in downtown South Bend, an opening up of ND’s campus to locals and a breaking down of stereotypes between locals and students.”

South Bend doesn’t always get the best rep among Notre Dame students, but Murray says it has a lot to offer.

“While some ND students complain that there is nothing to do in South Bend except community service, we are actively trying to change that. And great things are already happening in our city, but there is no way for ND students to find out about them,” Murray says.

Since starting the Bridge Project, Murray feels a different connection to the city.

Murray says bridging the gap “won’t happen overnight, and it might take 20 years, but it definitely should happen.”