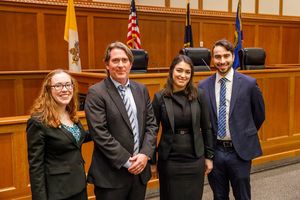 The National Registry of Exonerations, based out of the University of Michigan Law School, counts every wrongful conviction that gets overturned in the United States. The number of exonerations almost doubled between 2011 and 2016. For some, overturning convictions can feel like an attack on the American justice system. Professor Jimmy Gurulé worked in the U.S. Treasury, Department of Justice and the U.S. attorney’s office before teaching at Notre Dame’s Law School. He said that each time he saw an article about this spike in exonerations, he brought them to his classes to contemplate.

“My first reaction would be, how could this be in a country that is governed by the rule of law?” Gurulé said. “How was it that the system broke down, this very robust system of rights and procedural protections ... How did it break down? Where was the fault?”

Since 2017, Gurulé has supervised two exoneration programs at the Law School. On the education side, the Notre Dame Exoneration Project (NDEP) drafts policy proposals based on research and focuses on programming, including bringing exonerees to campus for open lectures. The newer Wrongful Conviction Externship (WCE) consists of students and faculty working together on real exoneration cases locally, and counts for academic credit.

Alumnae Tia Paulette and Erika Gustin revived the inactive NDEP after Keith Cooper, a shooting exoneree, visited campus for a lecture in the spring of 2017. Cooper’s story had a particular appeal at Notre Dame because of its proximity to campus, showing that wrongful convictions are not only a big-city issue.

“It happened not in New York, not in Los Angeles, not in Chicago. It happened in Elkhart, Indiana,” Gurulé said.

Cooper’s lawyer, Eliot Slosar, worked with Cooper during his time in law school and argued his pardon in front of a parole board in the landmark case.

“He ultimately got the state's first ever actual innocence pardon,” said Slosar. “They have not had one since. He's the only person that's ever been exonerated in Indiana based on evidence.”

After the event, Slosar and Gurulé sat down with students over lunch to talk about getting involved in exoneration. Slosar works for the Chicago Exoneration Project and suggested how students could help. Not long after, the NDEP was booking more speakers and assisting Slosar in intake.

Lenora Popken began working with the newly-chartered NDEP when she arrived in the fall of 2017. She handled and summarized over a thousand pages of documents on a case during her first year of law school. Since then, she has logged over 300 hours of fieldwork in exoneration litigation and is now the president of the NDEP. Her tenure with the club spanned its division into the NDEP and the WCE, which was voted on and approved in 2018.

Popken’s own journey into the world of exoneration began when she was 14, standing across the street from a Georgia prison as a man named Troy Davis died by lethal injection. Popken said that the state’s handling of the entire trial and aftermath included “some of the most gross abuses of justice I’d ever encountered.” As a citizen of Georgia, she felt betrayed by her own government’s alleged mishandling of the case, especially in seeking the death penalty.

“I was exceptionally angry that that had been done in my name, purportedly for my benefit,” Popken said. “The overwhelming evidence of his innocence really stuck with me.”

Today, the WCE represents six clients in the area who maintain innocence of their crimes, with two more on the way. Because the work is life-changing, it is hardly straightforward. Complications can arise when exoneration implicates another suspect or clients want to contest a law rather than a conviction. Popken called these “massive concerns of the NDEP and WCE.” She said they stay true to a very specific mission: “fixing an acute instance of injustice.”

“We are very particular about our intake. We do not take on clients unless there is a claim of actual innocence,” she said. “We kind of say that we’re the wrong guy club, not the wrong law club.”

Herein lies the catch-22. This “wrong guy club” identity means that the WCE will always be treating the symptoms of injustice, not the disease: the “band-aid over a bullet hole,” as Popken called it. Wrongful convictions disproportionately affect people of color, and as a Hispanic advocate, Gurulé has seen firsthand how convicts struggle to return to normal life.

“The consequences of a wrongful conviction go well beyond the individual having his liberty,” he said. “Your life has been destroyed. You're going to have a difficult time getting a job. You got a felony on your record, who wants to employ you? Those consequences are going to haunt that person for the rest of their life.”

Slosar said the ultimate goal of a fairer and more careful justice system would benefit everyone involved.

“It's much more difficult to exonerate somebody on the backend than it would be to protect them from getting found guilty in the first place,” he said.

But he also believes that working to exonerate someone can impact the entire justice system, even if it focuses on one individual.

“Our litigation strategy is that by exposing the truth in our cases, it allows for the public, the judges, the defense attorneys and those innocent people in prison to become more aware of what may have caused unjust cases that they have worked on or been a part of,” said Slosar.

And what of the skeptics who see exoneration as an attack on the American justice system? Gurulé worked as a prosecutor for many years and said that exoneration, at heart, has the same mission as prosecuting should.

“It's always been about doing justice, not convictions. On this side, focusing on wrongful convictions, my goal is the same. It's to do justice, but now it's to confront the injustice, the travesty of a person whom the state wrongfully convicted and deprived of his liberty,” he said.

For all of these activists, the reward for their clients and themselves outweighs the moral struggles they face in doing this work. Popken said she continually finds beauty in the exoneration process.

"The greatest reward is interacting with your clients who have no hope and being able to provide some sense of hope.”