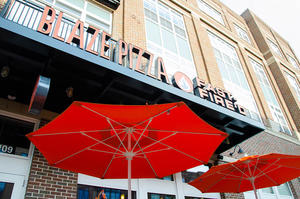 On Oct. 23, Blaze Pizza in the Eddy Street Commons was temporarily closed by the St. Joseph County Health Department for a string of non-critical and critical violations, including vinegar flies in the dining room, nonfunctional food storage cooling equipment and unsealed toilets in both the men’s and women’s restrooms.

This is not the first time that Blaze Pizza has been cited with health code violations. According to Carolyn Smith, the food service director at the St. Joseph County Health Department, within the past few months Blaze has had a “bad series of inspections,” mostly triggered by customer complaints.

Blaze was to remain closed until Oct. 30, the date slated for their health department hearing; however, according to the location’s management, since the Monday the location closed, they “worked each day to clean every area of the restaurant.” Blaze was able to reschedule its hearing for Oct. 27, with the hopes of reopening the location before the football weekend. Blaze then passed the re-inspection and was able to reopen its doors. The establishment is on probation: meaning that Blaze can expect frequent, unannounced health inspections over the next six months.

In order to prevent further health code violations, Blaze has instituted a comprehensive corrective action plan that was released in a press statement. This plan broke the health code violations down into five categories: top to bottom cleaning of the entire restaurant, vendor support, maintenance, operations and missing and damaged equipment. Among the laundry list of improvements the establishment made, key changes included: “meeting with a pest control provider for their suggestions on fixing the vinegar fly issues,” “reseal[ing] the men’s and women’s restroom toilets” and “ensur[ing] all cooling equipment is maintaining required ambient temperatures.” Another reformatory measure made by Blaze was training the location’s entire staff in ServSafe, a food and beverage safety training program.

Though the conditions of the restaurant should doubtlessly improve due to these new implementations, the ability to convince customers to eat at the restaurant is entirely out of Blaze’s hands. However, if the weekend crowds are anything to go by, most people hold the same view as Notre Dame first year Caroline DeVoto: “At the end of the day, I need pizza, and they have pizza. It’s as simple as that.”