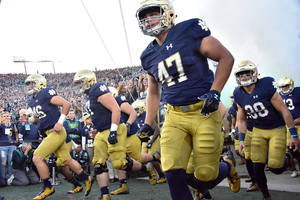 After a hugely disappointing 2016 season which saw the Irish trudge to a 4-8 record, change swept over much of the coaching staff. Head coach Brian Kelly was one of the few mainstays, as many assistants either departed or were let go. Defensive coordinator Brian VanGorder was fired only four games into the season after the team started 1-3. Offensive coordinator and quarterbacks coach Mike Sanford filled the head coaching vacancy at Western Kentucky, while assistant head coach and wide receivers coach Mike Denbrock left for Cincinnati to become the Bearcats’ offensive coordinator for 2017.

On the defensive side of the ball, Mike Elko was hired away from Wake Forest after three seasons as the Demon Deacons’ defensive coordinator and safeties coach. Needing to find replacements for the offensive voids, Kelly filled out the staff with a mix of familiar faces and some new to the program. One of the sources of new energy, Chip Long, was brought in from Memphis to replace Sanford.

“What [Elko] showed me was an incredible attention to detail, a great way to communicate and teach,” Kelly said in his season-opening press conference. “Chip Long showed me just an incredible veracity to want to be great in everything that he does, and his ability to relay that to the players under his charge.”

During Elko’s time in Winston-Salem, his defenses ranked among many of the nation’s best in a number of statistical categories. Perhaps the best indicator of Elko’s success before arriving at Notre Dame is this: In 2016, Wake Forest was one of four schools in the FBS to rank in the top-20 in turnovers forced (t-10th), sacks (t-12th) and scoring defense (t-20th). The other three schools were Alabama, Clemson and Washington, all of which reached the College Football Playoff.

Once in South Bend, Elko’s impact was felt immediately. Notre Dame’s defense improved drastically from 2016, flying up in the national rankings in rush defense (72nd in 2016 to 51st in 2017), scoring defense (62nd to 31st), third-down defense (60th to 37th), turnovers gained (104th to 50th) and tackles for loss (102nd to 58th). Before a disappointing November in which the Irish lost two of their final four games and gave up an average of 33.25 points per game, he was a semifinalist for the Broyles Award, awarded annually to the top assistant coach in college football.

Senior defensive back Drue Tranquill recounted late in the season that, in the summer, “I saw a defense who was buying around their new defensive coordinator and coming together. I don’t think I understood how special our defense was going to be, and then suddenly we were just playing out of our shoes and Coach Elko has just been incredible and our position coaches have been great.”

Long, who served as Memphis’ offensive coordinator and tight ends coach for just one season after four seasons at Arizona State and two seasons at Illinois, was brought in to replace Sanford. With his proficiency in utilizing tight ends in the passing game, Long was the ideal choice to come to South Bend and continue the tradition of developing great tight end talent. At every position, though, Notre Dame’s offensive stars were thrilled to have Long on their side of the field.

“I think we have all the confidence in the world [in our offense],” graduate student left tackle Mike McGlinchey said late in the season. “We know that it starts from the top with Coach Long and his game plan and what he’s been able to do for us this season. We have all the trust and faith in the world in him, and then it works down to us as the players.”

Junior running back Josh Adams added: “The offense, of course, with Coach Long is a faster paced offense, and I think that with our conditioning and with our workouts and everything, we’ve done a great job of transitioning to that.”

Former quarterback Tommy Rees, who played in 45 games (30 starts) for the Irish from 2010-13, became the new quarterbacks coach. This was not the first stop on Rees’ coaching career. He spent the 2015 season as a graduate assistant at Northwestern and was an offensive assistant in 2016 for the San Diego Chargers.

“Coach Rees has been awesome for me and the rest of the quarterbacks,” quarterback Brandon Wimbush said two days before the team’s season-opening win against Temple. “He’s been great, and he’s given us all the answers if we do have questions. He’s gotten our backs throughout the whole spring through fall camp because he’s — he just went through it like four years ago, so he knows what goes on in the quarterback room.”

Under Rees’ guidance, Wimbush was a dual threat for the Irish, accounting for over 200 yards of offense per game, and his 14 rushing touchdowns broke the previous school record of 10.

On special teams, Kelly brought back Brian Polian as special teams coordinator to begin his second stint with the Irish. Polian had previously been a part of the program in a variety of roles from 2005-09, returning to South Bend after four seasons as the head coach at Nevada.

“I had a great deal of respect for [Polian] coming in,” Kelly said. “I wanted somebody with a veteran presence, somebody that had experience at the highest level, special teams experience was crucial, and then coming off his experience as a head coach. He was going to have to get in front of a room and really take charge of a group of guys that are so crucial to our success. When you put that responsibility on somebody, you want to be able to trust that person. And I trust him to have that leadership role.”

One component of the coaching overhaul often went overlooked on the outside, but its effects were definitely felt within the program. Matt Balis was hired as the director of football performance and David Ballou as a co-director of football strength and conditioning. Balis had spent 16 seasons as an assistant or the head of strength and conditioning at Houston, Utah, Florida, Virginia, Mississippi State and UConn. During his career, Balis has worked on developing programs through skills including explosive power development, which was a key point of emphasis in Kelly’s offseason training developments and throughout the 2017 season.

Ballou, meanwhile, is no stranger to coaching and developing top talent. In 2016, he worked as the physical conditioning coach at IMG Academy (FL), recognized primarily for his work in speed gains and injury prevention. IMG had seven players laser-timed in the 40-yard dash at under 4.5 seconds in 2016 after not one was even close to approaching that mark the season prior. Local Irish fans might recognize his name because, before working at IMG, Ballou served for 14 years as the head strength and conditioning coach at Avon High School, a top-tier 6A school in Indiana.

“The charge that I gave Matt Balis was to create an environment down there that we could build the traits necessary for excellence,” Kelly said in the spring. “Our mission for excellence is to graduate our players and to play for championships. I think his staff has done a great job collectively of building those traits within a very positive environment, one that challenges our players in a positive way and gets the performance necessary of building those traits of excellence.”

Adams agrees: “[The new strength program has] done wonders. From a physical standpoint, we’re dominating our opponents. Mentally, we’re stronger. We did a lot of mental training throughout the off-season, not only getting our bodies right, but getting our minds right, preparing playing each opponent.”

While a significant portion of the praise for accomplishing a 10-win season goes to the players, Kelly should also be credited for making these coaching additions to move the program past the forgettable muck that was 2016. Expectations will mandate that the improvement continue — despite Elko’s departure to be the defensive coordinator at Texas A&M, with linebackers coach Clark Lea promoted to fill the void — and that Notre Dame once again contend for a national championship, but this season certainly appears to be a step in the right direction.