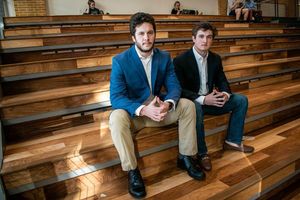 Hank Bates and Tom Henry, the only explicitly anti-crime ticket in the 2020 race for student body president and vice president, started off their sit-down with Scholastic by generously offering the staff meat sticks.

On their approach to campaigning, Henry said, “I think when you wake up a champion you walk in with champion energy. That’s what we do. We wake up, we look at ourselves in the mirror, and we see excellence.”

Their platform begins with a promise to ban all crime on campus.

“We’ve been reviewing a lot of recent studies and we’ve found that 99.9% of crime was, in fact, a direct cause of crime,” Henry said. “Crime is the root cause of crime.”

“If crime occurs, we must make it illegal, then crime will not happen,” Bates said.

When asked how they would respond to the claim that crime is already illegal, Bates said, “That’s a gray area in the law.”

“Du Lac, all hail du Lac, says some stuff, it restricts certain actions, it does say some stuff, but it never explicitly says crime is banned on Notre Dame’s campus. We’re here to change that,” Henry said.

“We’re the only ones that have come out against crime officially,” said Bates.

How do they plan to stop crime? “Carefully,” Bates said.

“Since Notre Dame was founded and student government has been founded at Notre Dame, the climate has been changing dramatically and we have found that we think it might be, though we’re not saying it is, it might be a direct result of Notre Dame,” Henry said.

“We’re a causation, not a correlation type of campaign,” said Bates. Their proposed course of action is to write a strongly worded email to “Mr. Climate” or the “CEO of Climate” because “the climate needs to stop changing.”

An even more ambitious proposal, the Dorm Baby Initiative, is an idea proposed to combat the decrease in student responsibility on campus.

“What fixes something better than a one-year-old infant child?” Henry said.

“People always say that kids fix marriages,” said Bates. “And likewise we’re thinking responsibility within your room, within your hall, we think a kid could really fix that.”

At the beginning of every semester, the university would provide each room with a one-year-old infant child.

“Maybe instead of going out and drinking one night, a twenty-one year-old kid will take care of his child,” Bates said.

The hope is to encourage students to take responsibility for the infant, thinking, for example during class, “How’s my baby?” throughout the day.

When asked where the university will obtain the infants, Bates responded, “TBD.”

The Introduction to Failure course proposed by the candidates arises out of the belief that Notre Dame students can benefit from administered physical and mental adversity.

Modeling the board drill with Bates, Henry said, “We think with the help of Notre Dame’s defensive line against our students, we can show them what true physical failure is like.” This and other tactics intended to undermine student confidence and self-esteem will, according to Bates and Henry, prepare students for the workforce.

They’d also like to see shag carpeting in all of the bathrooms on campus, including in the showers.

“This is why I love Tom, he just surprises me,” Bates said.

Their most ambitious proposed policy, however, leans into the notion of the Notre Dame bubble. They’d like to see the secession of Notre Dame from the United States.

“We need more unity on campus. There’s no better way to have unity, then to break apart from everyone else,” Bates said. (Embassies would be established for off-campus students.)